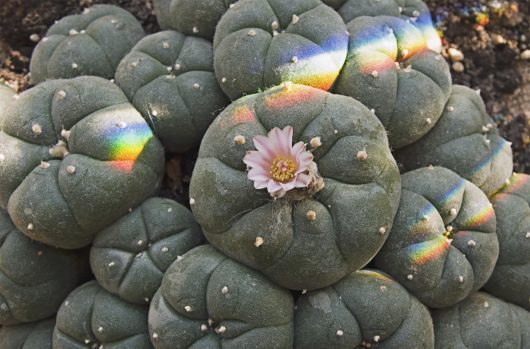 Ever since Carlos Castaneda published “The Teachings of Don Juan,” tourists have been coming to Mexico and illegally harvesting the Lophophora Williamsii cactus, more commonly known as Peyote. The Wixárika, also known as Huichol Indians, ceremonially use Lophophora Williamsii in their religious rituals and depend on the Mexican government to protect the Peyote that grows along the trail that the Wixárika follow during their ritual trek.

Tourists in Mexico Are Putting Peyote At Risk

Since it is illegal in Mexico for anybody who is not part of the Wixárika tribe to harvest and use Peyote, many tour guides take people to places where the cactus grows to let them reap the crop without giving them any instructions on how to sustainably harvest the crop. Harvesting Lophophora Williamsii using unsustainable methods is the main reason why the plant is at risk of being over-harvested.

It takes Peyote over 30 years to grow. Removing it in a way that is not environmentally sustainable poses the risk of destroying the ability of the Wixárika to use the plant for decades.

Methods such as GPS tracking units, security guards and fences have been used to stop poachers from illegally harvesting Peyote. Illegally collecting Lophophora Williamsii carries a jail term of up to 25 years in prison but most police officers in Mexico tend to took the other way when tourists steal the plant.

The use of Lophophora Williamsii is an integral part of the religious experience for the Wixárika or Huichol Indians. Tourists who are harvesting Peyote on the sacred sites used by the Wixárika for generations are putting the rights of the Wixárika to use Peyote during their religious rituals at risk.

Pedro Medellin, who is running a study on the risks that tourists who harvest Peyote are putting on the Wixárika or Huichol Indians, stressed the importance of the cactus in Wixárika rituals to NPR. Medellin stated, “If Peyote disappears, then their whole culture disappears.”

Furthermore, NIERKIA, the Multidisciplinary Association for the Preservation of the Indigenous Traditions of Sacred Plants, published a pamphlet detailing some of the steps that the Mexican government could take in the future to protect Peyote so that the Wixárika always have access to Peyote during their rituals.

A loophole in Mexican law allows people to come to San Luis Potosi to consume Lophophora Williamsii in the desert without risking jail time. It is only illegal to harvest and remove the plant from San Luis Potosi to use it in other places. The Mexican government must have more consistent laws about the harvesting and use of Peyote in order to better protect it on the lands that are sacred to the Wixárika.

Even though it is a balancing act to protect the rights of native peoples while also promoting tourism to the area, it is important to ensure that native groups that live in a specific region are not forced to give up their traditional identity in the pursuit of economic prosperity. The Mexican government is beginning to help protect the ancient rituals of the Wixárika.