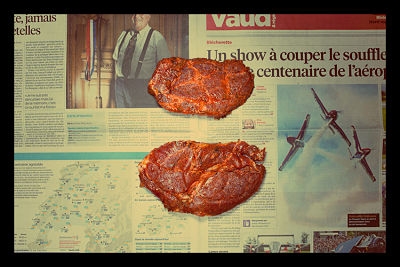 Determining what the poverty line is and who lives below it is a task often left to international organizations. It requires much analysis and research as well as a substantial amount of estimation. That’s exactly what propelled husband and wife pair Stefen Chow and Hui-yi Lin to travel the world, combining their passions and professions, to document how much food someone living on the poverty line can actually buy.

Stefen is a photographer while his wife Hui-yi is an economist. From their frequent traveling, both had become affected by the vast differences between not only the rich and poor but the differences between the poor in each country. The question and this mission became to document what it really meant to be poor.

Although calories are the same around the world, how much can $4.91 buy-in America compared to 64 cents in Madagascar? Through their investigation, the couple spoke with the poor, trying to gain real insight into how they shop for their food. They took into account the basic essentials such as grains, fish, and vegetables but also included food such as candy and more extravagant meats to see how much could be bought in each country.

Going through the markets, Stefen Chow would photograph each amount of food against a newspaper. When asked why he chose this specific setting, he responded that as a photojournalist, the newspaper was merely a product of the artistic process. His focus was on poverty and before visiting each country, they only had in mind the set currency amount they had to work with and nothing else.

Recently, their website received a makeover. It is absolutely amazing how interactive it is with all prices listed in USD. Site visitors can easily see how much meat could be bought in Switzerland, a country whose food allowance for those at the poverty line is $10.25, compared to Nepal, where the poor are expected to survive on 45 cents per day. Images are separated based on developed countries, developing countries, food groups, and even processed or unprocessed foods.

Simple awareness through such well-assembled visual representation will no doubt bring hundreds of thousands of visitors to the site. It may shock some while confirming the assumptions of others. It can also exemplify a need for policy changes in certain countries where controversy exists whether the set caloric intake as well as money allocated to food is enough for someone to survive on.