Tag Archive for: How to provide clean water to the poor 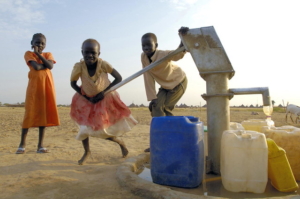 Water is the source and sustainer of life everywhere, but that does not mean it is readily available everywhere. Developing countries and communities often have limited or difficult access to water, and even then it may not be clean enough to safely drink. With so many people needing help, and the situation different in each community, the question remains: what are some available ways to provide clean water to the poor? Fortunately, many have explored this question

The Water Project is an organization that builds sustainable sources of clean water for poor communities. In March 2019, they improved an existing well in the village of Lungi in Sierra Leone and the well provides clean water today. The well was initially completed in 2000, but did not provide water from March to July. During those months, people relied on a nearby swamp for water. The swamp was unhygienic and far away. After deepening the well and giving it a new hand pump, 333 people had access to water year-round. The Water Project also provided hygiene training, which included teaching the community how to create hand-wash stations using a jerry can, string, and some sticks.

Another method for cleansing water of pathogens before consumption is solar disinfection, referred to as SODIS, where water is placed in a clear plastic bottle and left in sunlight to disinfect. When done correctly, it is a zero cost method of purifying water. In a project that lasted from 2013 to 2015, HELVETAS, a Swiss organization, introduced the SODIS method to the region of Benin. The method was taught at schools and brought to the local government and it resulted in 66,000 people learning how to disinfect their water.

Other ways to provide clean water to the poor come from technological innovation, such as AtmaGo. Initially launched in Indonesia as a website, it has since become an Android app for originally for building a web of information about water prices. Families in some areas could spend 10 percent of their income on clean water from a vendor, not knowing that better prices could be found nearby. With AtmaGo, this knowledge became more readily available, allowing clean water to become a safe part of a family’s budget. AtmaGo has since taken on other functions, including disaster relief and preparedness. Now, more than one million people in Indonesia use the app.

Simple innovations can also provide clean water to the poor. A prime example is the Hippo Water Roller, a barrel that can be filled with water, and then rolled long distances via handle. It helps people more much more water than is possible with the containers most communities use, and rolling a barrel is easier than carrying a container. It is a significant boon for communities that have to travel long distances for their water supply.

This has been useful to the communities of Tanna Island in Vanuatu. World Vision International distributed Hippo Rollers to communities in Southwest Tanna, where many live on narrow ridges away from the ocean and cannot rely on wells. The result is a journey of 100 to 300 meters down to rivers, creeks or the sea. The containers often held only 20 liters of water for transport at a time. The Hippo Roller, by contrast, holds 90 liters of water and can be transported more easily. As a result, Tanna communities have easier access to clean water, which means more time for the children who help with water collection to study.

Wide-scale installation, increased communication and simple innovation are all ways to provide clean water to the poor, and anyone can help implement them. New, more efficient methods of water preservation and transportation are always in demand. The organizations undertaking these efforts require constant funding and a steady supply of manpower. Thanks to dedicated organizations and people from all walks of life, solutions that provide clean water to the poor remain plentiful.