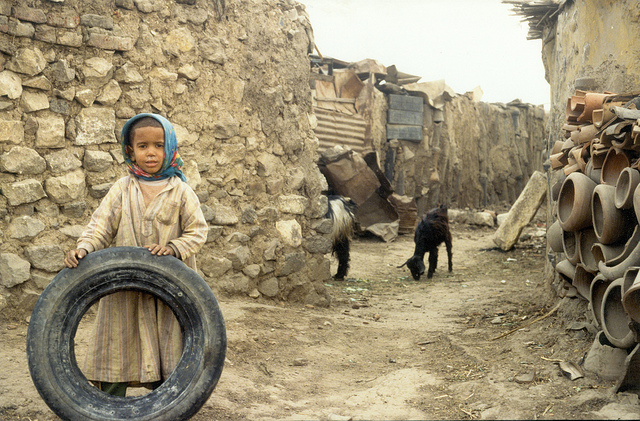 Poverty takes on many forms, but in Egypt, housing is the epitome of substandard living conditions. Dismal mud brick squatter houses with no windows, no doors, no proper roofing and no protection from the environment’s weather and creatures, are the homes to more than 20 million Egyptians.

Although a vital aspect of wellbeing, housing is one the most neglected segments of Egyptian society and, being present for over 7 decades now, the housing crisis in Egypt is one of the leading issues in its country today.

The Root of Informal Housing

Needless to say, no one would live in this setting by choice. However, many Egyptians are under the crippling circumstances of housing production shortcomings accompanied by falling income and rising costs for adequate housing.

In other words, with less housing for a growing low-income population, poor families have nowhere else to turn; instead, they build their own squatter homes absent of essential qualities of safety and sanitation.

According to the Egyptian housing ministry, 2.5 million homes need to be built within a 5-year timeline to catch up with its population growth, make up for its backlog of 3 million homes and ultimately, combat the housing crisis in Egypt. Moreover, international investors are concerned with Egypt’s lack of long-term clarity.

Egypt’s government intervenes in housing projects and subjects development plans to their unforeseen policy swings. Therefore, stability both in the market and political atmosphere of Egypt are prerequisites to attracting much needed foreign investments.

From 2014 to mid-2015, the Egyptian government and Arabtec, a construction services provider from the United Arab Emirates, underwent a $40 billion deal to produce a million low-cost homes, ideally relieving the housing crisis in Egypt.

The deal fell through after the Egyptian government went against previous land price agreements by demanding more from Arabtec than it could match. Arabtec could not accept this higher price, especially for the building of low-cost homes rather than the more profitable courses of middle to high-income residential projects.

Egypt can implement the public-private partnership practice in which the government and a private sector entity reach an agreement to co-develop housing projects with incentives attracting both parties. Land prices can also be deflated to combat current inflated prices and consequently, prevent gridlock or fallouts in large-scale housing developments with foreign investors.

Finally, once development ventures are undergone, other infrastructural facets must be included — such as roads, utilities and transportation — to avoid more disconnected squatter communities from forming and expanding.

Although Egypt is in the midst of a housing crisis that has fueled the fire of poverty and substandard living conditions, all efforts are focused on extinguishing such strife-ridden issues. In fact, the government formally stated that its central aim is to tackle the prevailing housing issue after the Egypt Economic Development Conference.

Beginning in 2018, it has been reported that 150,000 low-income homes have been built and 260,000 are currently being constructed. Other housing projects are also in execution, and roads have been installed in desolate areas to promote further development.

Egypt, with the rest of the world, awaits the day that it finally climbs out of its poverty-stricken state. In the meantime, all hands are on deck to resolve the housing crisis in Egypt and provide a more prosperous future.