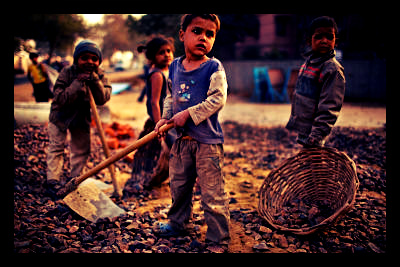 “Millions of children are victims of violence and exploitation. They are physically and emotionally vulnerable and they can be scarred for life by mental or emotional abuse. That is why children should always have the first claim on our attention and resources. They must be at the heart of our thinking on challenges we are addressing on a daily basis. We know what to do, and we know how to do it. The means are at hand, it is up to us to seize the opportunity and build a world that is fit for children,” remarked Ban Ki-moon, Secretarty-General of the United Nations on November 20, 2009, on the Twentieth Anniversary of the Convention on the Rights of the Child.

Just as Ban Ki-moon mentioned, children are not physically or mentally ready to enter the labor force. With the lack of physical abilities, the safety of the workplace cannot be ensured, for both the children and other employees. In fact, children are more likely to be abused and mistreated in an environment centering around child labor.

“Few human rights abuses are so widely condemned, yet so widely practiced. Let us make (child labor) a priority. Because a child in danger is a child that cannot wait,” stated Kofi Annan, Former UN Secretary-General. Around the world, more than 211 million children between the age of 5 and 14 are being forced to work. Among these children, 120 million children are working full time.

To eradicate child labor, people should first understand what leads to such situations. For example, poverty is the first and foremost reason of child labor.  Since many parents do not have the capability to support their household, children end up working to help support the family’s daily lives. Another reason for child labor is a poor education system.

When education is expensive or not readily available, impoverished parents do not see the benefit of learning and think that working is a better alternative. In the United States, there are many laws that prohibit child labor, however, in some countries, child labor laws exist, but are not enforced. Companies can thus take advantage of the cheap labor and further exploit it.

On the other hand, many organizations have been striving to put a stop to child labor by various programs. For example, the United Nations has been running campaigns to raise the awareness of child labor across various nations and airing them in global events such as the World Cup. Moreover, in order to raise the level of education in poverty stricken areas, the Red Cross and governments of third world countries have been recruiting teachers to volunteer in remote areas.