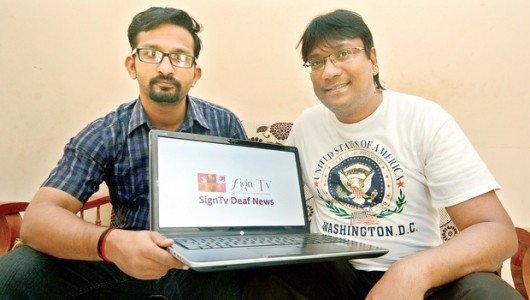 Currently in India, there are an estimated 63 million people with significant hearing loss, making auditory in-capacities the second most prevalent form of disabilities in the country.

Unfortunately, despite the high numbers of people who are hearing impaired, the country is still lagging in its efforts for the provision of facilities to the hearing impaired. In impoverished and rural areas specifically, the disabled populace faces particular difficulty in accessing special needs services.

The National Association of the Deaf in India reports only a few thousand deaf children enrolled in a survey of 159 schools, a shockingly low enrollment rate considering the percentage of the total Indian population that is hearing impaired. Only two percent of the schools use sign language to communicate with deaf students, according to government statistics. Ineffective communication leads to a gap between the curriculum and the actual learning for the students.

This communication issue exists not only in educational facilities but in media outreach as well. Few resources are available for reaching the hearing impaired community. This deficiency prevails in the instruction of sign language as well. These inadequacies significantly cripple the hearing impaired individuals from realizing their full potential.

With these challenges in mind, Kingsley David, a Kerala-based software developer, came up with the idea for SignTV. The project is aimed at educating the hearing impaired and deaf in Indian Sign Language, as well as keeping them informed on the latest developments in news, health care, education, etc.

The channel broadcasts news from around the world to keep the deaf population up to speed with current events. They also feature health segments with information about diseases and how to prevent them. There are also instructions on the sign language itself to teach the audience to follow along. The SignTV team, led by David, also produces YouTube videos, which are tutorials on the Indian Sign Language. The tutorials, as well as the news and health videos, are also archived on their online blog.

The efforts of this channel are aimed toward bettering the access of the hearing impaired to important information on everything from global events to personal health. The rapidly increasing availability of TV and the internet makes this a particularly effective medium. The next project of the SignTv team is to encourage all special education schools in the country to include at least an hour a day of sign language training into their curriculum.

The channel is a small but highly commendable endeavor geared at improving the lives of the deaf and hearing-impaired in India. The lack of resources plagues this effort as well, but the SignTv team is hopeful that with increased community awareness, this issue is not difficult to be tackled. Provided adequate funding, their goal is to expand their channel to increase the community engagement of the hearing impaired and end the stigma associated with disabilities in India. Notwithstanding any hurdles, the project is an exemplary illustration of the power of technology in alleviating social injustices.