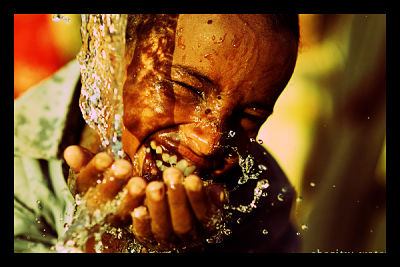 Over a year ago, Jake Yonally of Santa Barbara joined the youth movement for global water access, Hands4Others (H4O). He and his teammates in the Santa Barbara Soccer Club even went on to create their own chapter, Soccer4Water. Hands4Others is a group of young people who came together to look past their own lives and help those in need. It was started by 3 local teenagers after they witnessed the disparity between those with water and those without. Their goal is to provide sustainable access to clean water all across the world by helping more than two million people in 500 villages by 2015. They have already helped over 100,000 people in 10 countries and are quite capable of executing their goals.

Presidio Sports, Santa Barbara’s sports news site, interviewed Jake when he came back from his most recent trip to Honduras. There he and others from Hands4Others worked for a week to install safe water systems and latrines for the people of various villages across South America. Honduras is among the poorest countries in Latin America, with 60% of its population living below the poverty line. And where there is poverty, there is a lack of clean drinking water.

Jake was not just building while he was in Honduras, though. He and his teammates also spent time playing soccer with children in the village with balls donated by the soccer club. He stated, “I love to connect with people through soccer and help others at the same time.” His coach, family, and the board members of the soccer club all stand behind his dream of helping others.

Jake, his teammates, and other members of their soccer club raised money in support of his goal to get a total of $10,000 to provide an entire clean water system for a village during the Hands4Others Walk4Water last June in Santa Barbara. Jake has also raised money by scoring goals in soccer matches, sending out direct appeal letters, and working in his family’s olive grove in his free time. So far, he has raised 60% of his goal and hopes to reach the full amount by the end of the summer.

Without the assistance of people like Jake and his team, 9 million people will die from a lack of clean water to drink this year alone. But when someone stands up and decides they will no longer accept the idea that so many people live in poverty, we see real sustainable change take place.