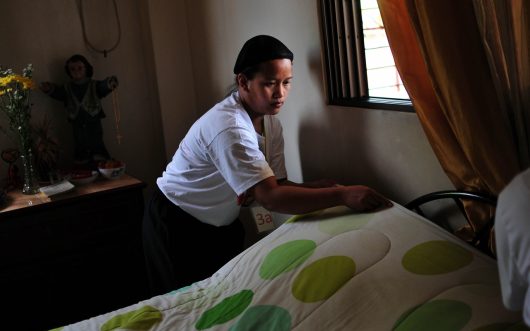 Teresa Ramirez Murillo was born in the Mexican state of Guanajuato in the 1960s. Ramirez grew up on a farm where she helped her family grow and harvest corn and beans. Most of the farm produce was used to feed the family of nine and the little that was left over was sold for minimal profit. Ramirez says life in the countryside was hard and the land “gave you very little for all you put in.”

One Woman’s Quest for Education

Given the lack of opportunity and the preponderance of low-paying jobs in rural Mexico, Ramirez left her hometown when she was 11 to go work in Mexico City as a domestic worker. Ramirez claims this was a very good decision, as it allowed her to send remittances back to her parents that helped them pay for much needed medical services, medicines, clothes and food.

Furthermore, Ramirez believes she would be lost in the world if she had not gotten out of rural Guanajuato, since she would never have attained the standard of living and the skills she has today.

Through her job as a domestic worker, Ramirez was allowed to continue her elementary school education as an adult. During the time she worked for an American family in Mexico City, she was not only allowed but encouraged to go back to school after work. Ramirez was able to complete elementary school up to the third grade before the night school for adults she attended closed. After this, she did not return to school and as time went by, she began to feel that the opportunity had passed.

Ramirez’s deep love of school and passion for mathematics inspired her determination to give her children a full education. She used the money she earned as a domestic worker to give her three sons an education that would let them “do something with their lives.”

Her youngest son follows in Ricardo’s footsteps and the middle son prepares to enter university to become a defense attorney. Ramirez’s sons have accomplished what she could never have dreamed of as a child in Guanajuato, and she is very proud that her domestic worker job could provide and finance her children’s education.

For Ramirez, working as a domestic worker allowed her family to make the transition from poverty to lower middle class and created the groundwork for future generations to begin life in a higher rung of society. As such, every subsequent generation of her family can continue to rise as their parents are given better and better opportunities.

Ramirez was very lucky that the families she worked for were respectful, fair and always paid for the work Ramirez did accordingly. This is not the case for many domestic workers in Mexico.

Whether working in the informal sector or not, many domestic workers in Mexico face sexual and physical abuse and unfair work conditions. The Guardian reports there are usually no employment contracts so domestic workers have no guaranteed fair pay and their employers take advantage by paying very low wages.

At the end of 2015 domestic workers decided they were fed up being treated as less than human and formed the first National Union of Domestic Workers (Sinactraho). General secretary of the Union, Marta Leal-Morales, told the BBC, “this union would be to defend the rights of domestic workers, so they could have a better quality of life.” The purpose of the union is to ensure that Ramirez’ positive experience as a domestic worker becomes the rule rather than the exception. Most domestic workers in Mexico want it to be a right, not a matter of luck, to benefit from their work.

Hopefully, the Union will bring the shift to domestic work becoming a transition job that allows families to cross the bridge out of poverty and move forward toward a better life for themselves and future generations.