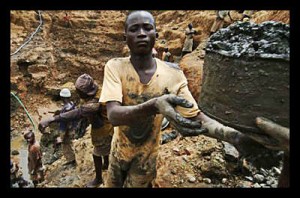 “What is a house without food?” A report from the NGO Human Rights Watch poses this question straight from the lips of a resettled farmer in Mozambique. The report examines Mozambique’s coal mining boom due to foreign investment, documenting the resettling of farmers in resource-rich areas that causes food insecurity.

In Mozambique in particular, the mining companies Vale and Rio Tinto displaced local communities from 2009-2011, a move that majorly disrupted daily life for almost 1400 households. For many of these displaced families, the investment in natural resources that should have brought increased profits to the region and country instead jeopardized regular access to food, water, and income opportunities.

The Paradox of Plenty

Statistically, countries with a high amount of natural resources experience lower economic growth and a slower development rate than countries with less natural resources. This is known in economic theory as the “resource curse,” or the paradox of plenty. Multibillion dollar companies investing in these countries’ economies promise a “trickle-down” effect that rarely — if ever — improves the quality of life and average daily income.

A number of phenomena are linked to the “resource curse.” From a historical perspective, regions with visible high amounts of natural resources are seen as more attractive targets for conquest and imperialism. With this precedent of constant push and pull of conquering countries, the host region’s development of governance and infrastructure is stunted. These regions, while relatively stable in governance now, developed with a major disadvantage in the modern economic environment.

Another chief indicator of the “resource curse” is rampant corruption on both state and local level. Extractive industries often collude with corrupt governments to allow them mining or logging rights to land claimed by indigenous people. In the Indian state of Andhra Pradesh, indigenous communities who should have been protected by constitutional law from exploitation of their land were bypassed entirely when their state leaders covertly gave foreign companies leases to mine bauxite.

While corruption on the ground level could theoretically be bypassed entirely if a foreign company advocated for the rights of the people in the surrounding region, the “resource curse” is certainly not limited to an individual country’s ability to manage its own natural resources. While Rio Tinto and Vale did implement relocation plans approved by the Mozambican government, company representatives did acknowledge the poor arability of the land to which households were relocated.

Even so, the World Economic Forum sees foreign investment in the natural resource sector as a key part of making Africa’s economies more globally competitive. Growth poles — simultaneous investments coordinated in many sectors to support self-sustaining industrialization — are posed in the Africa Competitiveness Report 2013 as a way to make investing in the host country profitable.

A WEF project entitled “The Madagascar Integrated Growth Poles Project” tested the concept of growth poles, partnering both public agencies and private corporations (including Rio Tinto) to develop infrastructure, provide skills education for both the engineering and hotel industries, and improve the process of business creation. These projects improved the overall business environment in Madagascar, according to the WEF. In 2005, private investment in Madagascar was US$84 million; this number increased to US$1045 million in two years.

What sets “growth poles” apart from isolated foreign investment is dedication to expanding the market in the host country. While the largest investments may initially be extraction of natural resources, they serve as profitability assurance for other firms to invest – both international and domestic.

The key to responsible foreign investment in a country experiencing the “resource curse,” is the balancing of the investor’s profits and economic development for the host country. Partnership of MNCs (multinational corporations) and NGOs hold the most promise, because while companies – both in-house and international – ultimately invest in natural resources for the bottom line, aid and development ventures can improve the standard of living in the communities most affected by natural resource development.

Furthermore, in order for foreign investments to improve developing countries, they should not be isolated or exploitative. These ventures must be planned so as to strengthen and not undermine existing enterprises in the host country. Foreign business investments that help host countries the most are ones that promote and supplement investment in all sectors.

Responsible implementation of foreign investment in Africa’s natural resources is rare. If WEF’s Growth Poles Project is any indicator, there are ways to improve a country’s chances against the “resource curse.” MNCs Rio Tinto and Vale certainly have the resources and precedent to face Mozambique’s mining backlash with an increased dedication to developing growth poles in the region, and in their other investments, to improve development.