Tag Archive for: Greenhouses in Afghanistan 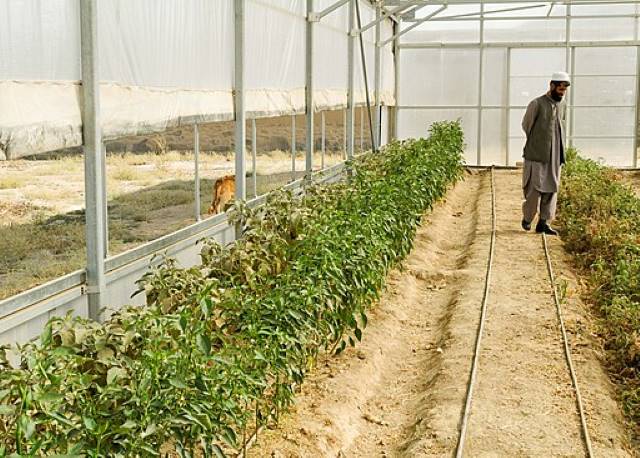 On April 12, 2013, the World Bank approved funding for the National Horticulture and Livestock Productivity Project (NHLP) in Afghanistan. Under this governmental program, greenhouses are distributed to families across Afghanistan’s provinces. More than 300 Afghan women in the province of Kapisa alone are able to grow food year-round for their families with some women even becoming the sole breadwinners of their family due to farming made possible through the NHLP’s distributed greenhouses. The United Nations implemented the Community-Based Agriculture and Rural Development project (CBARD) in Afghanistan in 2018, a program that involves similar creations of greenhouses in Afghanistan. CBARD has led to the construction of 70 greenhouses in the Ghormach district alone. As the success of micro and commercial greenhouse distribution through both the World Bank and U.N.-initiated projects has grown, the importance of long-term and community-based anti-poverty solutions has become clear internationally.

The NHLP has reached 291 districts across all 34 provinces in Afghanistan, covering more than 500,000 citizens, half of whom are women. Each greenhouse costs 25,000 afghani (or around $320) to build, with recipients selected “based on financial need and access to at least 250 square meters of land.” After distributing these greenhouses, the NHLP also provides classes for participants on how to cultivate vegetables and apply fertilizer made from organic waste.

With the goal of tailoring the CBARD project to Afghanistan’s agriculture, the U.N. aims to benefit an estimated 46,000 households across the nation. As part of this general agricultural program, greenhouses are implemented as “key infrastructure” across the region. The U.N. explains that due to cultural and security concerns throughout many provinces, it has also focused on the implementation of micro greenhouses so that women can grow crops inside their homes. With the CBARD program currently active in the Badghis, Farah and Nangarhar provinces, the program has built hundreds of micro and commercial greenhouses for farmers.

The Need for Year-Round Food

Greenhouses in Afghanistan have provided access to produce during winter months while also providing a general improvement in food quality. This is especially beneficial for children and pregnant women who are vulnerable to malnutrition. Saima Sahar Saeedi, NHLP social affairs officer, explains to the World Bank that these greenhouses aim to reduce childhood malnutrition with children able to “eat the vegetables grown in their own family greenhouses.”

Due to Kapisa province’s especially cold winter climate, many families are unable to grow produce such as wheat, potatoes and vegetables throughout the year without the help of greenhouses and are unable to afford produce at a local bazaar. Some greenhouses in Afghanistan even help families sell crops. One recipient, Roh Afza, tells the World Bank that the money she made from selling her greenhouse produce is used to buy “clothes, school uniforms, notebooks and books for [her] children.”

The U.N.’s CBARD program has focused on the Badghis region specifically, where citizens depend on agriculture as their primary occupation. With an increase of droughts, however, much of the population has turned to poppy cultivation, which requires less water than other crops. Poppy cultivation not only requires an entire family to work but results in minimal profits and reduces the fertility of the soil. The CBARD program aims to reduce the dependence on poppy cultivation in the region by implementing greenhouses for the production of crops such as cucumbers, tomatoes, eggplants and peppers.

The Global Success of Greenhouses

The success of both the U.N.’s CBARD program and the World Bank’s NHLP initiative include achievements in combating malnutrition, poverty and food insecurity through both micro and commercial greenhouses. Greenhouses have also furthered agricultural progress and livelihoods in rural Jamaica as well as Japan, China, South Korea and Taiwan. The U.N. and World Bank’s greenhouse implementation programs create long-term, community-based solutions in combating food insecurity, poverty and malnutrition.