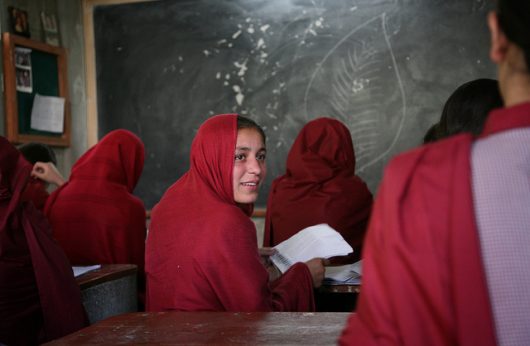 Pakistan has struggled for many years with the gender inequality of women achieving an education within their country. Pakistan is the sixth most populated country in the world, but with more than 40 percent of women never receiving an education, the nation has one of the lowest literacy rates on the continent.

While women do have the right to access education in Pakistan, there are several barriers that prevent them from doing so. In a patriarchal society, women find it difficult to access education and other opportunities because of the role a male-dominated culture plays in all of their lives.

One barrier that many women face in Pakistan is lack of accessibility. Many women living in the rural areas of the country are unable to attend school because they cannot afford the cost of transportation — for themselves or their children.

Although women and girls struggle to access the education in Pakistan that they so desperately need, there are many organizations working tirelessly to change these unfortunate circumstances.

The organization works to remove barriers that would otherwise prevent women from accessing education. TCF provides schools in rural environments which eliminates the need for transportation to more urban areas where more schools are located.

Working alongside The Citizens Foundation, The Kashf Foundation’s goal is the same. Established in 1999, the Kashf Foundation was created to help women from low-income areas build their entrepreneurship skills and complete their education.

The goal of this foundation is to help eliminate poverty by empowering women, which in turn provides better opportunities for their families.

The Central Asia Institute (CAI) is yet another non-profit working with the underprivileged women and children of Pakistan. Over the past twenty years, this organization has changed hundreds of lives by supporting women’s literacy.

With a wide variety of services — such as vocational centers, scholarships and even health centers — CAI is changing the educational system in the most impoverished areas of the country. The group provides services to both boys and girls but recognizes where the biggest change needs to happen — women’s education.

Progress for Education in Pakistan

In the past, achieving an education in Pakistan has been extremely difficult for women. But, like many countries, Pakistan wants to be able to provide its women with the same educational opportunities as its men. Unfortunately, that goal isn’t how situations always work out.

Pakistan has shown admirable effort in support of the education movement — many organizations have come together to redefine the way women receive schooling. Many people are starting to recognize that when women are educated, everyone benefits.

Women become empowered, and in turn, are able to lead happy and more successful lives. Pakistan has made many crucial changes in regard to gender equality and education, and is better as a nation because of it. Girls’ education has always been a point of concern in many developing nations. Pakistan is one among them. The Economic Survey of Pakistan (2015 – 2016) highlights a 2 percent decline in the nation’s literacy rates from 60 percent to 58 percent. Also, while the urban areas mark a literacy rate of 74 percent, it is as low as 49 percent in the rural areas. But, with the increase in awareness, undiluted efforts and the focus on ‘Pakistan Vision 2025’, the future for girls’ education in Pakistan looks bright.

In 2018, fresh hope has emerged for Pakistan as it experiences a host of welcoming changes, all focused on enhancing girls’ access to education:

On March 23, 2017, The UNESCO Director-General Audrey Azoulay and the Korean Ambassador to UNESCO Lee Byong-hyun signed an agreement to support national capacity building to make girls’ right to education a reality in Bahawalpur and Muzaffargarh districts in South Punjab and Gilgit-Baltistan.

This $3.4 million project between UNESCO’s Girls’ Right to Education Programme in Pakistan and the Korean International Cooperation Agency aims to bring quality education in the remote regions of Pakistan.

The youngest Nobel laureate visited her hometown Swat Valley in Pakistan on March 31, 2018, not simply to relive the memories of growing up in her house but also to present her hometown with the gift of quality education.

She opened a state-of-the-art school using The Malala Fund and her Nobel Prize money. Malala writes in her blog, “Pakistan comes second after Nigeria in the ranking of out-of-school children, with 24 million girls and boys denied access to education today. My dream is to see all Pakistani children with access to 12 years of free, safe and quality education…In just a few years, Malala Fund has invested $6 million in our work for girls’ education in Pakistan, from opening the first secondary school for girls in Shangla to supporting Gulmakai Champions across the country.”

Malala’s recent visit births new promises for young girls and women who struggle for their rights on a daily basis. Though some parts of Pakistan still advocate the extremist mentality and hatred for Malala, change is slowly ushering in and Malala’s visit proves it. The visit is also a positive answer to all the doubts about government involvement in enhancing the lives of women in Pakistan.

On this year’s World Book Day, resistance took a new form in Pakistan. Sanam Maher, a journalist based in Karachi, recently published a novella titled Knowledge is Bulletproof which tells the story of two girls who survived the Taliban attack along with Malala in 2012.

The world has not heard much about Shazia Ramzan and Kainat Riaz who endured the terrifying incident and continue their fight for girls’ education in Pakistan. This book which was inaugurated by the award-winning Pakistani filmmaker, Sharmeen Obaid-Chinoy, provides these young activists more scope to voice their strength. Obaid-Chinoy claims that the profits will be donated to charities that work towards improving girls’ education in Pakistan.

The book is designed by advertising agency BBDO and has a Kevlar binding which makes it strong enough to repel a nine-millimeter bullet from as close as five meters. The book is symbolic of the strength and willpower of Pakistani girls and women who continue to attain education despite all the hurdles that come their way. It is also a source of motivation for many girls who refrain from going to school due to many stereotyped social and cultural taboos. “To show that knowledge is indeed bulletproof, it was…ideal to design an actual bulletproof cover for the book,” Maher told The Arab News.

While she is excited at the possibility of reaching out to millions of girls through this new venture, she also hopes that the need for such campaigns lessen with time and more and more people realize the importance of girls’ education.

Education is the backbone of a nation’s economy. If a section of the population is deprived of it, it not only affects the nation’s GDP but also its standard of living. Though poverty continues to affect millions in developing countries, these recent developments offer hope for a brighter and better tomorrow. They prove that transformation is slow but in process. Promoting girls’ education in Pakistan and elsewhere and encouraging women’s participation in the labor force are among the major ways in which poverty can be abolished. With an estimated 22.6 million children (aged 5 to 16) out of school, Pakistan is facing an education crisis. This education concern is disproportionately affecting girls, who make up two-thirds of out-of-school children. With so many girls not able to achieve more than an elementary education in Pakistan, USAID has made it a priority to improve girls’ education in Pakistan.

Only 54 percent of girls are enrolled in primary school, and this number drops to just 30 percent for secondary school. From there, it is estimated that only one in 10 will complete their secondary schooling, being pulled out of school for financial reasons or to be forced into marriage. These practices are typically concentrated in rural areas, but affect girls throughout Pakistan.

With secondary education difficult to access for many girls because they are subject to arranged marriages or financial pressures, USAID has started a program to focus on girls’ access to secondary education. So far, USAID has created 33 schools covering sixth through eighth grade for girls between 11 and 19. These schools will be set up in rural villages where there are often no existing secondary schools for girls.

USAID is also working to improve other dimensions of Pakistan’s education crisis. USAID has done so by building and repairing more than 1,135 schools since 2011, and by educating more than 660,000 primary-level students through its reading program. USAID has also committed over $70 million to implement its Empower Adolescent Girls strategy in order to help educate more than 200,000 young girls in Pakistan.

In addition to improving students’ access to education, USAID is investing in teachers by repairing and building the 17 Faculty of Education centers in Pakistan as well as by providing more than 3,100 scholarships for aspiring teachers to earn their education. USAID has also trained more than 25,000 teachers and school administrators since 2014.

When a child is educated, their livelihoods improve and they are given the tools necessary to be lifted from poverty. While there are still far too many children out-of-school in Pakistan, USAID is working tirelessly in order to give every child access to a complete education.