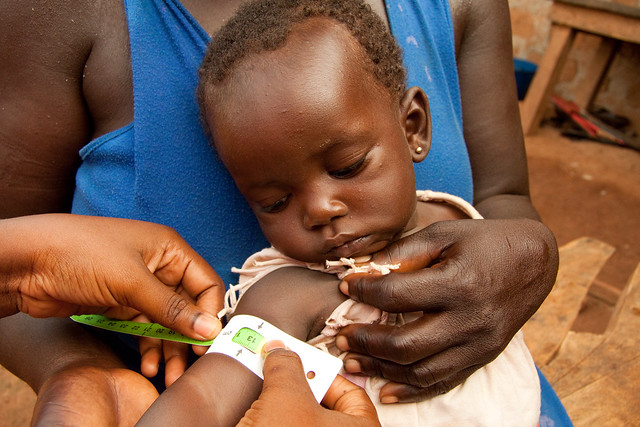 A new report by the United Nations concluded that widespread child under-nutrition has taken a toll on Ghana’s economy. The report, The Cost of Hunger in Africa: Social and Economic Impact of Child Undernutrition in Ghana, found that the effects of hunger and stunting cost Ghana $2.6 billion dollars per year.

The report argues that Ghana’s government must make nutrition more of a priority in national development planning in order to improve food security.

Chronic malnutrition and stunting afflicts 19 percent of Ghana’s population and is responsible for 24 percent of all child mortality cases. Some areas face more hunger than others as 30 percent of children under five in Ghana’s northern region are stunted. Stunting occurs when adolescents are severely deprived of critical nutrients, such as proteins and minerals, while in the womb or during the first two years of life. According to the report, 37 percent of Ghana’s adult population suffered from stunting as children.

The effects of stunting are also felt in Ghana’s educational system. Children who are underfed are more likely to miss, repeat classes and drop out of school. The report estimates that of the current working population aged 20 to 64, 72 percent of people who were stunted as a child completed primary school compared to 80 percent of those who were not stunted.

The report further says that repeating grades “increases the demand that the education system must meet, with the resulting costs in infrastructure, equipment, human resources and educational input.” In 2012, the 19,720 students who repeated a grade cost Ghana’s education system approximately $12.85 million.

Malnutrition also limits adults’ ability to work and contribute to Ghana’s economy. In manual work, such as agriculture, people affected by stunting lack the strength necessary to match the production and efficiency of individuals who are healthier. Non-manual workers who are stunted also produce less output because they received fewer years of schooling than people who were adequately nourished as children.

The U.N. recommends that the government invest more in nutrition policies and interventions to boost the overall health of Ghanaians. Better coordination among national agencies is necessary to create a more concerted approach to providing citizens with better nourishment.

The report notes that forging partnerships with private organizations and non-state actors will help the government “accelerate the development and implementation of malnutrition prevention strategies.”

Health officials can also raise more awareness about ways that people can improve their nutrition and health.