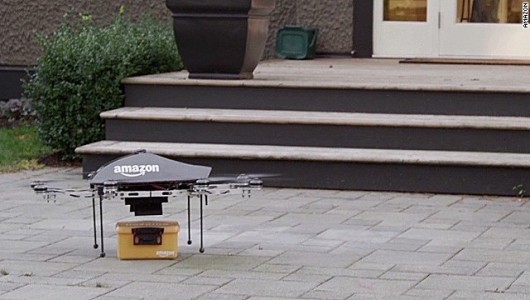 Although the final episode aired in September of 2013, Futurama remains a popular TV series today as it appeals to a range of generations, from youths to adults. This series is an exaggerated representation of a prediction of 31st century life: exploration and the discovery of life in countless other galaxies, acknowledgement of robots as true life forms and an even greater reliance on up-and-coming technologies.

Although it is a satire, the show does address interesting points about this human-techno relationship that applies even in the 21st century. This is evident, for example, in today’s use of drones.

It is speculated that, in the future, artificial intelligence systems will take over most jobs currently held by humans. Amazon’s new drone delivery system promises faster, more efficient deliveries, thus lessening the need for other methods of package delivery. The drone could drop off a package on someone’s doorstep in approximately 30 minutes or less. While this system, overall, would be more convenient for the general public, it would take out a good number of jobs.

However, there is a bright side to this situation. More jobs relating to drones, such as drone operations and drone assembly, will open to the public, and newer technologies that make these drones easier to operate will open up jobs for those with fewer qualifications.

Another important aspect to address is the ease at which people communicate through technological mediums. According to Kristel van der Elst, head of Strategic Foresight of the World Economic Forum, “Technology will not only allow us to be constantly in contact in an increasingly close-to-reality manner, it will also soon enhance communication beyond what traditional face-to-face interaction could ever allow.” Van der Elst also said that “technology has the potential to redefine the relationships between civil society, government and business.” Communication technology improves the ease of communication in geopolitics around the world.

More often, in the media, there have been discussions about how technology helps and hinders communication. Also addressed is the fact that the more we communicate via this medium, the less private human interaction becomes. Criminals are now turning to new technologies to communicate, and governments have limited abilities to regulate threats of attack.

So, are we to regulate and respect human privacy? Or not to regulate and allow for more criminals to make the utmost use of technology? Authors have suggested that instead of trying to fight the evolution of technology, the government should find new methods of integrating technology into their everyday lives and into geopolitics, which would greatly improve internal operations in local governments as well as appeal to the public.