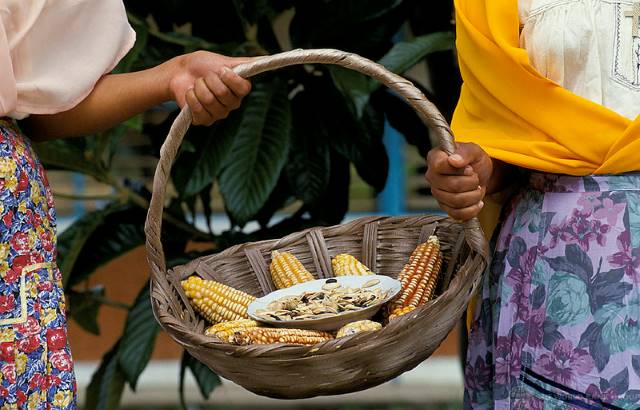 Two key factors explain the effect of genetically modified seeds on poverty. The first is dependence. Code explains that “many GMO seeds are intrinsically linked with pesticide use.” Code explains further that pesticide dependence can be dangerous as “this traps farmers in a cycle of needing the pesticides and needing these seeds… it becomes more and more expensive and uncomfortable.”

The difference between this cycle of seed use and traditional methods is stark as genetically modified seeds require the user to buy new seeds each year rather than harvesting and using older seeds from past harvests as is traditional. Farmers are unable to reuse genetically modified seeds and plants because they do not own them; the seeds belong to the company that sells them.

Not only do crops themselves threaten farmers’ prosperity, but the system of genetically modified agriculture also fuels poverty. With the introduction of genetically modified seeds came the promotion of farm consolidation, meaning that fewer farmers are necessary. As a result of this farm consolidation, around 200,000 agricultural producers in South America “have lost their livelihoods” in the last two decades.

“The amount of data is woefully inadequate on the health effects experienced by these farmers out in the fields,” shares Code on the issue of health in Latin America. However, even ordinary individuals can draw conclusions just from the nature of these practices. The link between genetically modified seeds and health is best explained by the pesticide use required for these crops.

Because farmers must store pesticides in the crops’ area, the pesticides constantly endanger people living around farms. To highlight the commonality of these exposures, Code reflects on her experience working in Honduras. She says, “A young man offered me water to drink out of an old pesticide bottle.” She explains the link to poor health by concluding that “these are exposures that shouldn’t be happening.”

Along with pesticides sprayed on crops, Code explains that “the seeds are often coated with pesticides, making the seeds themselves dangerous depending on the handling practices.” Unfortunately, many farmers cannot access ample personal protective equipment to protect themselves from dangerous chemicals.

Exposure to the seeds and pesticides is grave as long-term effects can include respiratory problems, memory disorders, skin conditions, depression, miscarriages, birth defects, cancer and neurological conditions such as Parkinson’s disease. In the short term, these pesticides can result in nausea, abdominal cramps, diarrhea, dizziness, anxiety and cognitive harm.

The effects of genetically modified seeds remain prominent in the lives of many Latin Americans. However, ongoing solutions aim to mitigate the effects. Code explains that the two most important ways to reduce the spread of genetically modified seeds and crops are education and regulation. As the pesticide program director for the Xerces Society, she works with farmers to implement more sustainable practices.

The Xerces Society is not the only organization working to spread awareness of the value of non-GMO crops. Civil society and social movements throughout Brazil, Ecuador, Colombia, Honduras and Guatemala have mobilized people to protect seeds and the heritage of agricultural practices. These movements are vital for boosting confidence in traditional practices, challenging narratives created by genetically modified seed companies.

Governments from across Latin America have also stepped up to help reduce the use of these seeds. Countries such as Guatemala and Ecuador have implemented full and partial bans on genetically modified seeds. Most recently, Mexico passed legislation to ban the use of transgenic corn and phase out glyphosate by 2024. These mark positive steps as government regulation can stop the trend of high-risk genetically modified seeds that have trapped many farmers. Such legislation will protect food sovereignty and the health of farmers in Mexico.

More legislative measures and actions are required to eliminate the effects of genetically modified seeds in Latin America. However, recent years have seen immense progress in efforts to reduce the seeds’ prevalence through policy action and awareness.