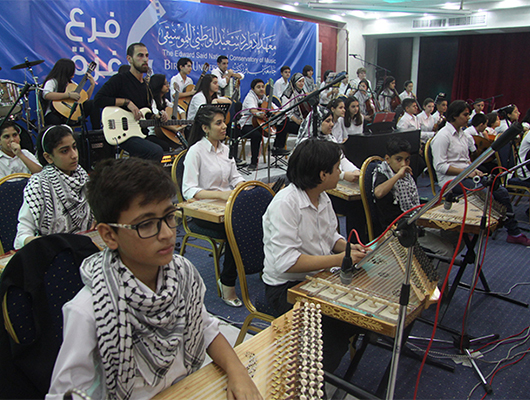 In 2009, during three weeks of bombing from Israel, the Gaza Music School was destroyed just weeks after its inaugural performance. After the 2014 attacks between Hamas and Israel, the school has become even more important to the young musicians.

The Gaza Music School was launched in 2008 and helps give young people in Gaza the chance to explore their creativity and show off their talents. Most of the students have never lived in a Palestine that wasn’t at war.

Outlets are necessary to help kids forget about the horrors they see during war.

There is a staff of 15 that take care of 195 musicians ranging from age seven to 16 and the school is competitive to get into. In order to help deprived by poverty, there is a scholarship program to ensure everyone has a fair chance. While there is no experience necessary, every student must pass a test of ear and rhythm.

In Gaza and the West Bank, 25.8 percent of the population live below the poverty line. The GNI per capita is $3,060 and economic growth fluctuates due constant instability of peace.

When you walk into the school you hear drums, cellos, pianos, flutes and a qanoun. These sounds help calm the students and their families by relieving stress and expressing themselves. Abu Amsha, the school’s academic coordinator, wishes to expand music education in Gaza to include more students.

Learning music helps students with all types of learning. Music requires the use of multiple skill sets. Students use their ears, eyes, and muscles while playing with sheet music or singing while playing an instrument. Therefore, neurological activity increases and you’re using more of your brain.

For music education in Gaza, students receive one-on-one attention from a teacher and practice at that school twice a week and 40 minutes a session. Since power goes out often in Gaza, teachers will even conduct their sessions in the dark. The school refers to music as “candle in the darkness.”

This type of education in Gaza is important to the community and the students. They have the opportunity to receive certificates for their time spent learning music and it gives them the opportunity to study at universities internationally. It is joyful, promotes expression, creativity, and hard work.

“Music is very important, especially in times of war, or when you’re under siege as we live now,” states Al Najaar.