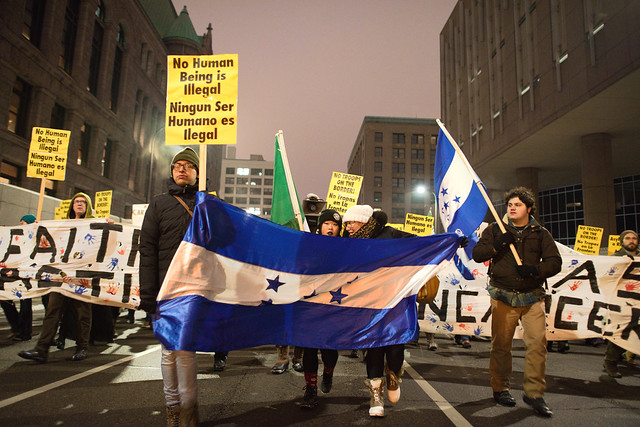 The northern region of Central America is currently one of the most dangerous places on Earth. So, it’s no surprise that refugees are fleeing Central America. This circumstance has caused high levels of migration as many refugees are fleeing for their lives. In countries such as Honduras, El Salvador and Guatemala, many people experience gang-related violence, human trafficking and extreme poverty. The brutality forcing refugees to leave their homes is constant and not improving.

Moreover, poverty in Central America is widespread. In some regions, half of the population lives below the poverty line. Consequently, the number of asylum-seekers is increasing in neighboring countries, such as Mexico and the U.S. In 2014, there were 2,000 asylum applications in Mexico. In 2017, applications escalated to more than 14,000. As this crisis continues, it is important to understand the reasons why refugees are fleeing Central America.

In the 1980s, civil wars weakened countries in Central America, leaving a legacy of violence and fragile governments. Due to these civil wars and mass deportations from the U.S., organized crime groups flourished. These groups grew into the overwhelming gangs present today.

Over the last 15 years, gangs have taken over rural and urban areas within Central America. They target poor, and thus vulnerable, communities by imposing their own authority. They also recruit boys as young as 12 years old and living in poverty as they lack educational or economic opportunities. Because of gang violence, the Northern Triangle is considered one of the deadliest places in the world, outside a war zone. For example, between 2014 and 2017, almost 20,000 Salvadorans were killed due to gang-related violence.

Gang culture has deeply penetrated the social fabric of northern Central America. Their grip on society is so severe that many migrants fear that their deportation will result in death. For example, 82 percent of women reported they would most likely be tortured or killed if they were to return home. Despite decades of authorities trying to eliminate gang activity, these criminal groups remain defiant and seemingly unbreakable.

Similarly, extortion-related crimes are common in this region. Gangs extort small businesses and local individuals by forcing them to pay protection payments. If these individuals cannot afford these amounts, the gangs will murder them. For example, it is estimated locals in Honduras pay $200 million in extortion fees every year. Extortion fees cost Salvadorans $756 million a year. This results in a significant financial loss for local businesses and endangers many lives.

Moreover, human trafficking is another common reason why refugees are fleeing Central America. Women and young girls are most vulnerable to sexual exploitation. Often, gangs target and traffick young children for the sex trade. In Guatemala alone, at least 15,000 children are victims of child sex trafficking networks.

Gangs also manipulate children. They subject children to forced labor, making them sell and transport drugs throughout El Salvador, Honduras and Guatemala. Though widespread, authorities prosecute an extremely low number of people accused of human trafficking. In Guatemala between 2009 and 2013, police detained 604 human traffickers. However, only 183 went to trial and only 33 were convicted.

A huge reason why refugees are fleeing Central America is lack of opportunity. Of course, this is largely due to the rampant crime and violence in the region. While the reality is grim, there is a reason to be optimistic. Many organizations and volunteers help these migrants in any way they can. In particular, Doctors Without Borders has been providing medical relief and mental health care to refugees traveling along migration routes through Mexico since 2013. The organization reported they provided more than 33,000 consultations at mobile health clinics and other facilities. Many patients need mental health care, especially women who are victims of sexual abuse. In fact, 31 percent of women reported being sexually assaulted along their journey.

UNICEF also recognizes the humanitarian crisis happening in Central America. UNICEF has offices in Mexico, El Salvador, Guatemala and Honduras. In these countries, UNICEF is working directly with people to prevent violence and alleviate poverty. They also help reintegrate deported children into their home countries and support children in asylum countries, protecting them from discrimination and xenophobia. UNICEF’s work in Central America is necessary as it is bettering the lives of many vulnerable people.

Often times, the only ways for migrants to escape the persecution and violence plaguing their hometowns is to seek asylum in another country. No matter how bleak these circumstances may be, hope can be found through the compassion and understanding of volunteers around the world. By understanding why refugees are fleeing Central America, people and organizations can begin working to change the conditions in these countries. 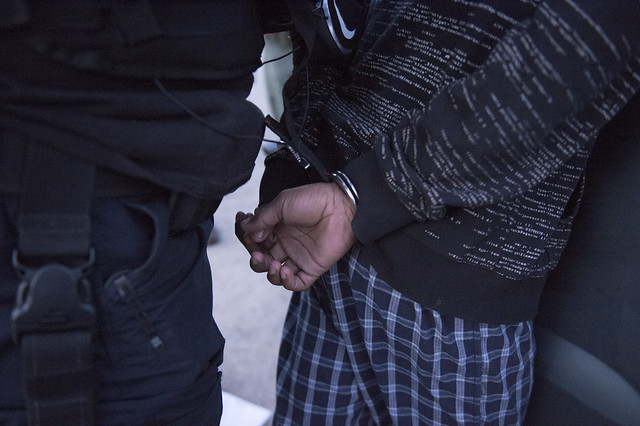 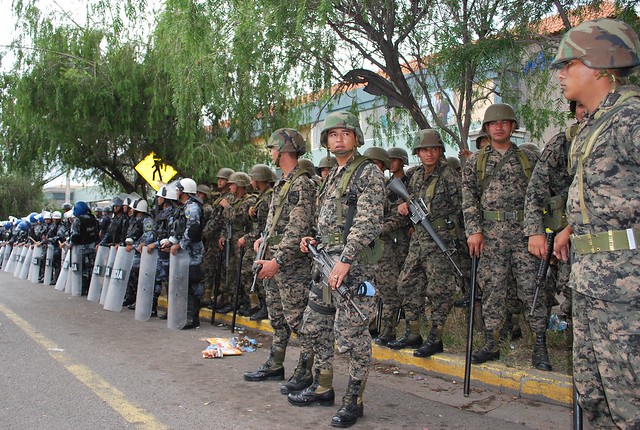 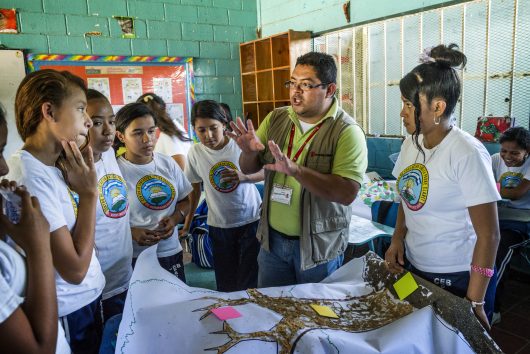 San Pedro Sula, Honduras is one of the most dangerous cities in the world. Thus, organizations and local leaders are combating gang violence in Honduras by helping young people find and make their own families.One teenager skateboards with friends he considers brothers. Another works on diagramming a family tree. Others join in soccer

One teenager skateboards with friends he considers brothers. Another works on diagramming a family tree. Others join in soccer games, or hang out at recreation centers. These activities have the same goal: to prevent gang violence from becoming a way of life for the next generation.

In a country where the maras, or gangs, recruit kids as young as 12, it becomes of vital importance that teens and youth find love and support elsewhere.  They want these kids to find support in their friends, families, and neighborhoods.

In the interest of halting gang violence in Honduras, USAID has partnered with local citizens to open nearly 50 outreach centers. Teens can go there to learn computer skills, play musical instruments, and participate in sports. Some outreach centers, like Casa de la Esperanza (House of Hope), organize movie nights and other events. The U.S. has also supported the clearing and revitalizing of 10 abandoned soccer fields to prevent gang violence in Honduras.

Fun activities, when combined with a confident leader, can form stable, even familial, bonds. The best example of this may be Jesse Recinos, who founded the club Skate Brothers. Recinos was nearly killed at the age of 16 after being wrongly accused of stealing from a member of a rival gang. In the aftermath of the experience, he decided to change his own life, and the lives of others, by bringing at-risk youth together to do skateboarding, BMX, rollerblading and breakdancing.

The club is about more than just busting tricks, and Recinos is more than just an instructor. He invites the kids to his house for meals and meets with their school teachers. Recinos is intent on keeping “his guys” away from gang violence and crime. He is at once a teacher, parent, and big brother.

Some programs focus on strengthening trust and communication inside the home, such as Proponte Mas, which offers counseling sessions to teens and young adults who are at risk for joining gangs.

Over the course of a year, the counselors work to reconnect the youth with separated family members. The separations typically occur either because violence has ruptured lines of communication or because relatives have migrated elsewhere.  Extended families draw closer together, offering the youth a strong support system to fall back on.

Being part of a family, the teens learn, also means being accountable. They are encouraged to do their schoolwork and to ask permission before leaving the house. Activities like the family tree diagram help spark an interest in family history. They learn to identify themselves as part of their family before any other group.

Sometimes, accountability to a family goes hand-in-hand with being able to provide for a spouse and children. Proyecto METAS, a program sponsored by the Education Development Center, was founded to provide unemployed young people, particularly at-risk youth or those who had left gangs, with skills they can use in the workforce. By March of 2017, the program had reached 56,000 youth and created 4,000 jobs and internships.

Tragedy still strikes frequently. Children die. Families flee. Moreover, the killers continue to walk away with impunity.  Honduras has one of the highest murder rates in the world: 60 out of 100,000 residents become homicide victims. Rampant corruption among the police and the government means that only 4 percent of these crimes result in convictions.

The American Justice Society (AJS), a Christian nonprofit association, is committed to halting gang violence in Honduras by putting these murderers behind bars. Its teams consist of a lawyer, an investigator and a psychologist, and they assist the government in building homicide and sexual abuse cases. AJS connects victims and witnesses to officials who are trustworthy.

One of the biggest challenges in prosecuting homicides is getting witnesses to appear in court. Witnesses who speak out, particularly against gang members, risk becoming murder victims themselves. The organization says that it can take anywhere from four to 15 visits to convince a witness to testify.

As criminals are put behind bars, halting gang violence in Honduras is, even more, dependent on the country’s youth. For things to truly improve, programs must expand their scope and work with youth who are already gang members.

Those who fight for the protection of human rights must also be kept safe. The U.N. has recently opened a new human rights office in Honduras, and is working to improve relations between human rights workers and the government.

Journalist Sonia Nazario, in a Sunday opinion column for the New York Times, urged the U.S. to put pressure on Honduras to spend more of its budget on violence prevention. She also brought up the problem that much of the aid that the U.S. sets aside for Honduras becomes caught up in U.S. bureaucracy and does not reach the nonprofits and local citizens who need it. There is still work to do. However, at least for now, progress has been made.