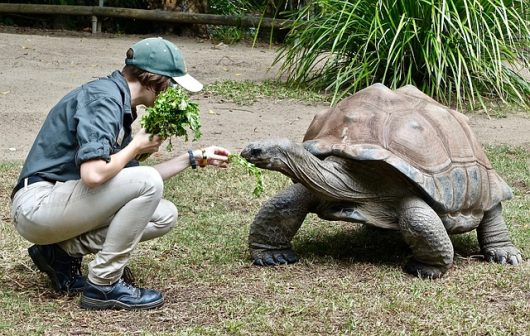 Tourism can be an important tool for developing countries to reduce domestic poverty. The global industry is responsible for 5 percent of the world’s GDP and helps provide foreign exchange earnings and over 235 million jobs. Many of these jobs belong to the poor in developing countries because of the labor-intensive and low-skill nature of work in the tourism sector.

Workers can often make $1,000 to $4,000 a year which can help bring workers and their families above the poverty line. Employment can be scarce in some developing countries, which makes tourism a necessary stimulant in otherwise stagnant economies. International arrivals continue to increase each year, which creates an even greater demand for labor.

One developing nation that sustainably benefits from the tourism industry is Ecuador.

Equador and the Galapagos Islands

The Galapagos islands host one of the few remaining natural sanctuaries for marine and bird life such as sea lions, octopi, sharks and flamingos in the world. Many of these species are endemic to the Galapagos, which means that they do not exist anywhere else in the world.

The animal life, geologic activity and lack of development have made the archipelago a premier travel destination for wealthy patrons looking for an expeditionary vacation. The islands continue to gain popularity as the number of visitors has grown from 17,500 in 1980 to over 200,000 in 2012.

The Ecuadorian government has kept pace with growing demand, while still preserving the untouched beauty of the Galapagos by employing a platform of Eco-Tourism.

Ecuadorian policymakers have actualized this approach in a manner that has maximized benefits to tourists, the local population and ecosystems alike.

The increasing popularity of the Galapagos islands for tourists has been met with several regulations designed to protect the environment and interests of the local people. The government mandates that cruise ships must be kept in Ecuadorian ports, which incentivizes international cruise liners to staff their boats with locals and purchase supplies from the mainland.

A study by Edward Taylor entitled Ecotourism and Economic Growth in the Galapagos (2006) found that overall tourism generates $200 million in revenues. Meanwhile, the locally-owned hostels have gained more popularity with tourists as a more affordable option to the small cruises.  These hostels expose tourists to local markets and restaurants, which further directs capital flows away from international cruise lines and towards the people of Ecuador.

Galapagos tourism reduces poverty by focusing on the inclusion and welfare of the locals. The environment has also benefited from this Eco-Touristic approach.

The islands were made a national park in 1959 and have become further protected as tourist numbers have increased. “Cruises are limited to having 100 guests per trip,” only certain areas are designated for expeditions and 97 percent of the island is protected from human habitation. Measures like these have protected the endemic wildlife of the Galapagos from human interference and invasive species.

The Borgen Project had the opportunity to interview an expedition leader for the Silver Seas cruise in the Galapagos, and he stated that “tourism only adds an average of 1,500 extra people to the islands each day because of the regulations.” Thus, Galapagos tourism reduces poverty without harming the environment.

The conservation measures taken by the Ecuadorian government have minimized the effects of human activity, but the presence of humans has still caused problems for some of the native wildlife.

The migration of mainland Ecuadorians to the three percent of the island not protected by national park statuses has created a presence of feral dogs, cats and goats that outcompete the native animals and bring some to the point of starvation.

The guide even explained that “feral dogs eat the baby giant tortoise eggs and the goats feed on the plants that several of native herbivores rely on to survive.”

The governing body of the Galapagos has responded by attempting to exterminate these feral animals and create breeding centers for endangered native species, but it’s important for tourists and migrants alike to respect the true natives of the archipelago.

Eco-Tourism, as seen in the Galapagos, should serve as a model for other vacation destinations. The Galapagos tourism reduces poverty through the influx of foreign spending and the jobs created, without harming the natural environment which is allowing tourism to flourish as well.