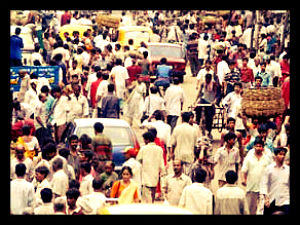 In 1968, the American biologist Paul Ehrlich published the groundbreaking book The Population Bomb.  In the book, Ehrlich predicted that humans would reach carrying capacity and begin to die out due to global famine by the 1980s.  He proposed birth control as a method to curb dangerously exponential population growth.  In effect, Ehrlich’s book opened the floodgates on the topic of overpopulation, one that has only been magnified by an increased awareness of climate change in the last few decades.

Today, environmental journalist Fred Pearce sees the overpopulation discussion as a diversion from the real issue:  overconsumption.  Pearce explains that the global population is not exponentially growing because birth rates are actually falling.  Contrary to the predictions of Ehrlich, mankind was not afflicted with famine in the 1980s and his views on birth control became obsolete when the inhumane practices of China and India became international news.  Pearce points out that in the 1950s most women had five or six children in their lifetime.  This number has been reduced to two or three children in the 21st century.

The more pressing problem, Pearce says, is overconsumption. The richest 7% of the global population is responsible for 50% of carbon dioxide emissions worldwide. The rich, not the poor, are responsible for most of our environmental troubles. Pearce says he is “very wary of people sitting in Europe deciding what an appropriate population level is for a country far away.” Instead, we need to focus on curbing our consumption back at home.