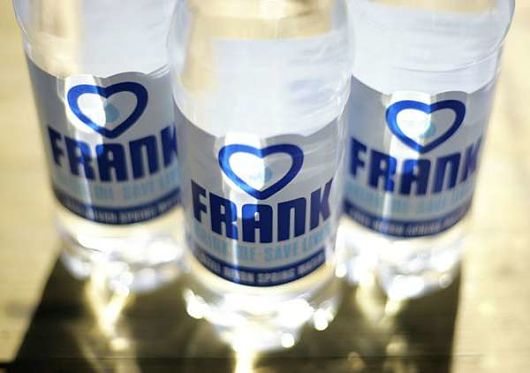 Katie Alcott, young social entrepreneur and founder of FRANK Water, started the charity and social enterprise by producing and selling her own brand of bottled spring water and using the profits to afford clean drinking water worldwide.

After being diagnosed with dysentery, Alcott launched FRANK Water, creating it as both a registered charity (No. 1121273) under the name “FRANK Water Projects” and as a social enterprise that donates all its net proceeds to FRANK’s Projects.

FRANK Water has impacted more than 200,000 people in more than 128 communities. The goal is to provide clean, accessible drinking water to the 748 million worldwide who need it the most.

In Chhattisgarh, India, FRANK Water is working with tribal Baiga communities so that they can access clean drinking water in the Kabirdham District. Since Chhattisgarh’s formation as a state in 2000, its local people have been severely exploited for their minerals and forests. They are without basic services, so FRANK Water works with them to develop advocacy methods, plans and roads for change. For two years, FRANK and its local partner SAMERTH have worked with 12,000 people across 36 communities.

In eastern Andhra Pradesh, the remote tribal regions of the eastern Ghats are left without basic water services. This lack of water devastates health, agricultural dependencies and other activities, causing the tribal people to develop at much slower rates. FRANK and one of its partners, VJNNS, are working to establish 10 gravity-fed water systems that will give 10 communities safe water through the earth’s natural gravitational pull. This will serve nearly 3,000 people.

FRANK Water also works in Madhya Pradesh, where fluoride is rampant in its natural water sources. Too much fluoride can lead to yellowing teeth and fluorosis, an incurable disease. FRANK is helping to establish projects to reduce the fluoride concentrations in the Dhar district of Madhya Pradesh, which is currently at 1.0 to 1.5 mg/l. These projects work with the communities to build lasting solutions such as low-tech rainwater harvesting. In three years, FRANK and PSI’s work will have provided safe drinking water to 3,000 people, while also training local communities on how to monitor water quality.

Improving access to water and better sanitation are FRANK’s main objectives. FRANK has worked in India for nearly 10 years, securing water access and sanitation with its local partners. The programs focus on its projects, advocacy and research and development, aiming to improve poor water, sanitation and hygiene conditions.

FRANK is frank. The safe water proponent is transparent and self-reflective. While small, it “packs a punch.”