Tag Archive for: Frame by Frame 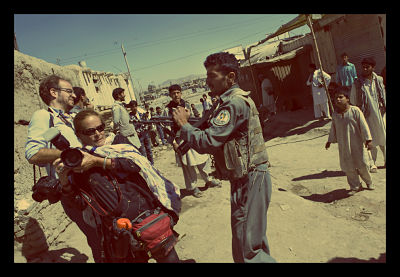 American directors Mo Scarpelli and Alexandria Bombach are working on a new documentary about photojournalism in Afghanistan called Frame by Frame. The directors joined Afghan war photographer and Pulitzer Prize winner, Massoud Hossaini, in his home country to document the rise of journalism in a place where taking a photo was once a crime.

A new culture of Afghan reporters and photojournalists has been growing ever since the ban on photography was overturned just over a decade ago. The documentary features the stories of four photographers, including Farzana Wahidy, whose work is uncommon for her gender in Afghanistan.

These four photojournalists and more have made great strides in the documentation of life in Afghanistan, the war, and the issues that are important to them. The necessity of journalism from the source is “to build democracy and independence, to check and limit those in power, to drive social and political change,” according to filmmaker Mo Scarpelli.

Local reporters have access to places and people which rarely welcome international reporters. Freedom of the press has improved since the people have gained the right to take photos and share the realities of day-to-day life with the world, but some are concerned about the future of such freedoms. With international forces leaving the country over the next year, international press will also be exiting. Defense, governance, and journalism will all be exclusively in the hands of the Afghan people, who face the threat of the Taliban reverting the country back to the time when snapping a photo was a crime.

The project was started in 2012, which was funded completely by the filmmakers themselves, one of whom drained her bank account entirely and even sold her car to make it all the way to Afghanistan. Frame by Frame is unfinished as of now, and the directors are relying on donations through Kickstarter to raise the funds needed to send them back to Afghanistan to fill-out footage for the film. Backers who want to see the film to completion have until August 28th to make a a pledge.