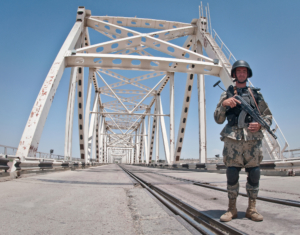 The former Soviet Republic of Uzbekistan contains approximately 33 million people and is the largest nation in Central Asia. Despite its surveillance apparatus, Uzbekistan struggles with various forms of violence that contribute to its high poverty rate of 12.8 percent. Terrorism and drug trafficking associated with the Afghanistan border spur fear and international concerns. Widespread domestic violence in the poor countryside hinders women’s rights and blocks economic productivity. However, important international partnerships with the U.N., U.S. and non-governmental organizations are working to create more responsible governance and halt violence in Uzbekistan.

1. Drug Trafficking: Uzbekistan is a thoroughfare for opiates originating in Afghanistan. Authorities routinely capture narcotics en route to Europe and have burned 54 tons of drugs since 1994. Addiction is a major problem that is at least 10 times as prevalent as official statistics display, according to the Overseas Security Advisory Council. Narcotics trafficking often involves organized crime, which spawns corruption and human trafficking as well.

2. Terrorism: Terrorism used to be quite severe in Uzbekistan. Suicide bombings killed 50 people in the cities of Tashkent and Bukhara in 2004. Attacks within the nation have lessened in recent years, but the radical Islamic Movement of Uzbekistan still resides on the Afghan border. A larger problem is the amount of Uzbek terrorists committing attacks on other countries. A 2017 State Department report showed multiple instances of this, the most severe being when an Uzbek man massacred 39 people in an Istanbul nightclub.

3. Domestic Violence: The most prevalent type of violence in Uzbekistan is spousal abuse. An extensive 2001 Human Rights Watch report displayed domestic violence was viewed as a private matter by village council, or mahalla, officials. Even in a case where beatings caused one woman to have four miscarriages, nothing was done. In 2019, Uzbekistan still lacks domestic violence legislation and abuse is culturally acceptable to 41 percent of women. An Organization for Economic Cooperation and Development report showed that 61 percent of women distrusted the justice system, particularly because mahallas focus on lowering divorce statistics rather than protecting women.

The United Nations Office on Drugs and Crime has worked in Uzbekistan since 1993 to fight illegal narcotics. Today, Uzbekistan is the headquarters of UNODC’s Central Asia Program, a $70 million initiative that hopes to increase anti-drug regional cooperation over five years. UNODC also stops the related crime of human trafficking across the Afghanistan border and administers antiretroviral treatment to those infected with HIV from drug needles. The U.N. helped 12,000 Uzbeks receive ARVs in 2015.

The Paris Pact Initiative is another program run by UNODC. It combines the efforts of 80 countries and organizations to combat the flow of opiates from Afghanistan. Uzbekistan is one of 11 nations hosting Paris Pact Research and Liaison personnel, who conduct narcotics research in the field. The success of the program’s first three phases garnered it a $6.7 million budget between 2013 and 2017.

Stronger ties between the American and Uzbek militaries will counteract terrorism while promoting government reforms in the country. President Trump met with President Shavkat Miromonovich Mirziyoyev of Uzbekistan on May 16, 2018 to commit to a bilateral relationship that would ensure security in the region. Both leaders agreed to the first ever “Five-Year Plan of Military Cooperation” and condemned terrorism in Afghanistan. Trump encouraged Mirziyoyev to pursue more human rights reforms for his people as the American military became involved.

The Department of Defense highlighted the progress of the Five-Year Plan in early July 2019, when Uzbekistan’s Defense Minister, Bakhodir Kurbanov, visited America. Kurbanov witnessed the effectiveness of officer exchange programs and American training curriculum in fighting violence in Uzbekistan. One Uzbek pilot will be training with Americans in Columbus Air Base’s Aviation Leadership Program in 2020.

International NGOs focus on empowering Uzbek organizations to combat domestic violence. ACTED is one of the most influential NGOs providing support in the country, and its social media campaign dispels domestic violence myths among youth. It funds and trains local women’s NGOs in a society where they are traditionally blocked from operating. The Oydin Nur Center is one successful project supported by ACTED. Since 2000, the center has counseled 5,155 abused women and assisted 9,000 women over a hotline.

The Marta Resource Center for Women is another international NGO educating groups on violence in Uzbekistan. Originally fighting domestic abuse in Latvia, Marta expanded to Uzbekistan in 2009 to address similar problems. It specifically targets the mahallas and teaches them the importance of stopping domestic violence. Marta also recognizes the stifled economic potential of abused women. In an interview, Marta’s founder Iluta Lāce discussed how a partnership with the Italian Chamber of Commerce, Craft and Agriculture helps women discover independence by founding small businesses.

Much work remains in the fight against violence in Uzbekistan. Legislation against abuse is still nonexistent, and conflict resonates throughout the region. There is a long road ahead. However, the above international partnerships display that Uzbekistan does not travel that road alone.