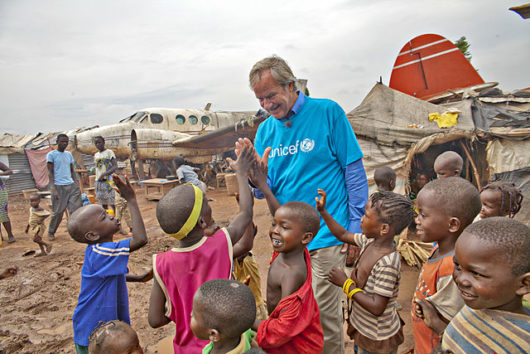 The partnership between Norwegian Airlines and UNICEF escalated in 2014 with the maiden voyage of their first “Fill a Plane” program. Norwegian and UNICEF boast that they fill every inch of a 737 Dreamliner with humanitarian aid. This humanitarian aid includes medical supplies, medication and education supplies. The destination of “Fill a Plane’s” first flight was to Bangui, the capital city of the Central African Republic.

Norwegian Airlines posted a touching Youtube video in 2014 about their first humanitarian flight. In the video, they noted that 8.5 tons of humanitarian aid were loaded onto their 737 in Copenhagen and flown to Bangui in the Central African Republic. This aid went to the thousands of internally displaced people under the care of UNICEF.

The ‘Fill A Plane’ Program: Jordan and Yemen

In 2015, Norwegian Airlines again sent another flight under their “Fill a Plane” partnership program. This time the plane was sent to Jordan to deliver humanitarian supplies to Syrian refugees in the Za’atari refugee camp. Norwegian Airline’s CEO, Bjorn Kos, opens the video by stating that, at the time, Za’atari was the world’s second-largest refugee camp. The contents of this flight focused heavily on educational aid.

There were no flights in 2016, so in 2017 Norwegian Airlines sent two. The first mission was to Bamako, Mali in March 2017. Here school supplies were an important part of the mission. The video shows Norwegian Airline employees taking part in classes as well as bringing food from the flight to the children’s hospital. The second mission was to bring aid to Yemen. Tons of food and cholera medication for 300,000 children were loaded onto the 787 Dreamliner, a much larger plane than the previous 737’s. The aid had to be offloaded in Djibouti due to the dangerous conflict in Yemen.

The future of the partnership between Norwegian Airlines and UNICEF looks promising. In 2018, Norwegian Airlines sent its largest “fill a plane” flight to Chad. The plane held over 13,000 kilos, over 28,000 pounds, of humanitarian aid to Chad. This flight also included the Norwegian Minister of International Development, who is shown in the video helping the Norwegian Crew members and other employees load the cabin with boxes of supplies.

In every video, the Norwegian Airlines CEO, Bjorn Kos looks genuinely happy to help his company do its part in humanitarian aid around the world. The CEO does not charge when he gives speeches and seminars; he only asks that a donation is made to UNICEF. With recognition from his own government and on the world stage, hopefully, the partnership between Norwegian Airlines and UNICEF will continue to grow and more flights can be sent each year, helping those in need.