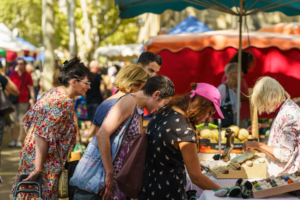 Menstruation shame and period poverty have become hot topics in France in recent years. Monthly tampons, pads and menstrual pain medications can be a heavy financial burden for an impoverished woman. As Règles élémentaires, a leading charitable association fighting against period poverty in France estimates, a woman has to spend around €10,000 to €20,000 on menstrual products in her lifetime.

Multiple campaigns took place in the early 2010s to appeal for more affordable sanitary products, mainly by calling for the lowering of the tampon tax. At the time, France taxed tampons as a luxury item, at 20%. In 2016, France became the first country in Europe to reduce the tampon tax to 5.5%. This brought menstrual products in line with other primary-need products such as shampoo or toilet paper.

The Labour Code in France states that an employer must “provide workers with the means to ensure their individual cleanliness.” However, according to the French Institute for Public Opinion (IFOP), there are still 1.7 million French women suffering from period poverty in 2019.

Règles élémentaires has been collecting hygiene products for impoverished women in need since 2015. It is the first French association that fights against period poverty as well as menstrual taboo. The success of this association soon inspired many more initiatives in France to address period poverty. For instance, a grocery store at Paris-Diderot University offers sanitary products at only 10% of the selling price to students with economic difficulties.

The student health insurance company, La Mutuelle Des Étudiants (LMDE) started to include sanitary protection reimbursement for up to €20-€25 per year. A women’s health charity, ADSF, distributes sanitary kits to women in need. This especially targets homeless shelters where women are often too reluctant to ask for them. “We now know that sanitary pads must be included in the kits distributed at shelters – and not just razors, as used to be the case when people associated homelessness with males only,” the group explained.

The feminist organizations and their activities gradually brought period poverty to the government’s attention. Two members of France’s National Assembly drafted a 107-page report on how to lift menstrual taboos and alleviate period poverty. After the report, Gender Equality Minister Marlène Schiappa and her colleague Christelle Dubos announced in early 2020 that the French government will carry out a one-year trial of free distribution of hygienic products for women in schools, hospitals, shelters and prisons. The budget will be €1 million. The initiative will start in the Île-de-France region as soon as the end of October 2020. In the first phase of the experiment, the region has chosen 31 high schools based on their overall percentage of female students and scholarship recipients. The regional government will provide these chosen schools with free organic sanitary products and dispensers.

French menstrual activists are still advocating that social security should cover all menstrual products, as it does for condoms. They have also devised a plan of vouchers and pre-paid cards for women in need to make their own intimate choices, rather than the government deciding which product they should receive. While great strides have occurred to alleviate the financial burden and social stigma as it pertains to periods, there is much more to do to further alleviate period poverty in France.