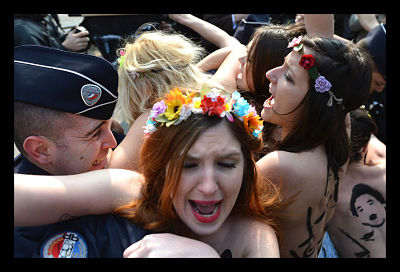 You have probably heard about the women who have been protesting, bare-breasted, all over Europe. They are FEMEN.

Started in Ukraine, the FEMEN movement describes itself as “the scandal famous organization of topless women activists, who defend with their breast sexual and social equality in the world.” With “Sextremism” as their motto, FEMEN activists clearly display their struggle: “Be FEMEN – means to mobilize every cell of your body on [sic] a relentless struggle against centuries of slavery of women!” Radical in their beliefs and actions, FEMEN activists depict themselves as “morally and physically fit soldiers, who every day make civil actions of the high [sic] degree of difficulty and provocativity [sic].”

Radical words require radical actions. Since 2010, FEMEN have become increasingly visible on the international political scene because of their turbulent interventions throughout Europe. FEMEN have been protesting intensively against sexism, homophobia, prostitution and religion. Using their bodies as their best weapons, FEMEN activists fight for women’s rights against dictates imposed by dictators, the church and the sex industry. “My Body, My Manifesto,” “Sextremism – FEMEN is the death of Patriarchy,” “I am Free” are some of the messages you can read on FEMEN activists’ breasts. Their protests incorporate political messages displayed on their bodies, enacting shocking scenes which gather attention and mobilization of greater numbers of people.

For instance, on July 3, three FEMEN activists demonstrated in front of the Elysee Palace, in Paris, in order to ask the French President to show solidarity with their imprisoned Tunisian fellow Amina. They were wearing barbed wired around their breasts and faces, lacerating their flesh as the police arrested them.

Banned from Ukraine after she denounced the arrest and subsequent imprisonment of the Pussy Riot – a Russian female punk group that had organized a punk prayer at Moscow’s Cathedral of Christ the Savior- Inna Shevchenko, one of the leading activists of the group, has been granted “political refugee” status in France.

The FEMEN ‘headquarters’ are now based in Paris, France. Recently, the creation of a new postage stamp in effigy of Marianne triggered political turmoil in France. Indeed, the Marianne depicted on the stamp is wearing a crown of flowers, symbol of the FEMEN activists. Inna Shevchenko provocatively commented “FEMEN is on [sic] French stamp. Now all homophobes, extremists, fascists will have to lick my ass when they want to send a letter.” Protest against the new French stamp has arisen, mostly because of the many Islamophobic comments of FEMEN activists.

FEMEN’s extreme actions and statements have been criticized by other feminists. Journalist Mona Chollet denounced the use of stereotyped young, skinny and beautiful women who display their bodies naked to fight for human rights, at the detriment of all those who do not fight naked and do not abide by the classic criteria of beauty and youth.