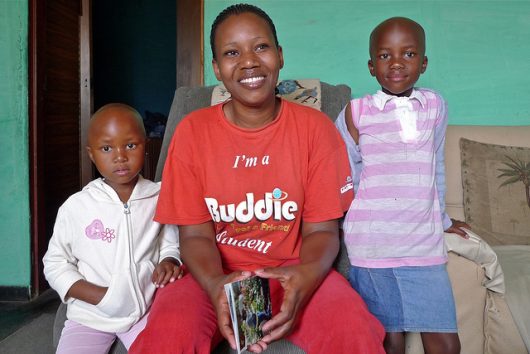 The gender gap favoring males in education is largest in low-income countries. But in Lesotho, a small, poor, landlocked country surrounded by South Africa, the gender gap in education favors females. The ratio of female-to-male enrollment rates in secondary education is the highest in the world, with 1.6 females enrolled for every male.

“This is really, really unusual in the developing world,” says Theresa Ulicki, a professor of Gender and Development Studies at Dalhousie University.

Employment rates of Basotho men in South Africa have since declined, but the same norms govern gender differences in education and labor force participation. Most males of primary school age are involved in cattle-herding— a practice that requires young boys to withdraw from school and tend cattle for their families — and many male adolescents withdraw from school to find employment in South Africa.

Equal access to education and employment does not necessarily result in gender equality. In Lesotho, the gender gap in education is in some sense evidence of the lower perceived value of women. Women’s literacy rates and other levels of education are higher than those for men, yet most Basotho women work jobs that have lower status and pay.

Other indications of gender inequality in Lesotho include gender‐based violence and related developmental problems. Gender-based violence is a serious problem in Lesotho, where females are marginalized, making them susceptible to HIV/AIDS, abuse and rape. In 2011, the rate of sexual assault in Lesotho was among the highest in the world, with 88.6 rape cases per 100,000 female inhabitants. In 2016, Lesotho had one of the highest numbers of new HIV infections worldwide. Illegal marriages are also prevalent, with 19 percent of Basotho females under age 18 being forced into illegal marriages, often with older men.

Education is a central element in economic development and social progress. However, female education in Lesotho shows that ensuring equal access to education is an important but insufficient step toward social development.