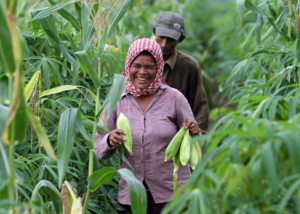 Feed the Future is a project that aims to address food insecurity in countries around the world. The United States Agency for International Development (USAID) coordinates the program between local actors in chosen countries and various agencies within the federal government of the United States. One of the main goals of Feed the Future is to foster the development of regional agricultural markets in the countries in which it works, thus promoting long-term sustainability. Other goals of Feed the Future include the expansion of technologies shared between agricultural communities and positive changes in nutrition, particularly for mothers and children. Notably, Feed the Future works with universities to fund agricultural research as well as national governments and private employers to improve agricultural policy and the economy. One of the recipients of USAID’s Feed the Future initiative is Cambodia, where 45% of the population experience food insecurity and 77% of people in rural areas rely on agriculture as their livelihood.

During 2004 and 2012, improvements to agriculture in Cambodia helped reduce poverty from 53% to 18%. This decrease occurred in part due to increased use of land for farming and expansion of technologies such as fertilizers, irrigation and mechanization. However, the growth of the agriculture industry in Cambodia began to slow the following year, necessitating a renewal of policy changes and programs to boost long-term output.

With assistance from USAID, the Feed the Future initiative in Cambodia created a program called Feed the Future Cambodia Harvest II began in 2017 and lasted through 2022. The program successfully generated more than 2,500 jobs and boosted agricultural policy. The direct economic impact of the program resulted in “$28 million of new private sector investments” and “$75 million of incremental sales” for businesses.

Due to the recent success of Harvest II, United States Secretary of State Anthony Blinken unveiled the continuation of the program with Feed the Future Cambodia Harvest III, or simply Harvest III, on August 4, 2022. This program is a further $25 million investment in agriculture in Cambodia over five years. USAID will continue to coordinate the program and will work with local technological and economic institutions and agricultural actors to improve both the job and product markets. The government expects that the program will create “$38 million in new private sector investments” and “ $100 million in sales,” which represents a significant improvement from the previous success of Harvest II.

The following week, on August 9, 2022, the United States Ambassador to Cambodia, W. Patrick Murphy, affirmed the start of Harvest III with the Minister of Agriculture Forestry and Fisheries, H.E. Veng Sakhon in Cambodia’s capital, Phnom Penh. After an almost $100 million investment in agriculture in Cambodia, Ambassador Murphy expresses hope that the continuation of Harvest III will maintain progress in improving agriculture and nutrition, especially among women and children in Cambodia.