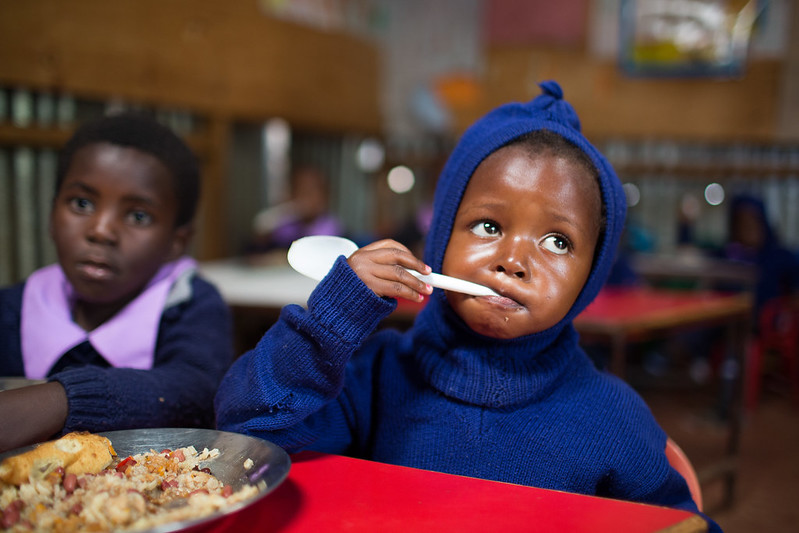 During the early weeks of the pandemic, many Americans were buying extra items that were hard to find in grocery stores, such as toilet paper, paper towels, rice and cleaning supplies. Now that supplies are back on the shelves, using those items can help feed hungry children in Africa.

According to a survey conducted between March 13 and 15, 2020 among American grocery shoppers, 54% said that they had stockpiled supplies that would last them for two weeks. Almost one-fifth of the shoppers purchased items that would last between three and four weeks, while 20% stockpiled enough for one week, and 7% were supplied for over a month.

Toilet paper was not the only item being hoarded. This spring, worried consumers bought staples such as rice and pasta in record numbers. But does a family really need that second oversized bag of rice gathering dust on the pantry shelf? Statistics show that many people in the United States were over-supplying their pantries. For example, a five-pound bag of rice equals about 13 six-ounce servings, which would feed two people for almost a week if each person ate a serving of rice every single day. Similarly, five pounds of uncooked pasta is equivalent to 13 servings, which feeds two people each a serving of pasta every day for about a week. Instead of stockpiling and letting these items linger on the shelf until their expiration dates, it makes sense for people to use just five pounds each of rice and pasta per week. Doing so could save close to $20 at the grocery store.

Now that supplies such as toilet paper are back on the shelves, families can also use stockpiled paper goods regularly instead of storing them indefinitely in the closet. By not buying two 12-roll packages of toilet paper this month, and instead using the rolls already in the closet, a family could save around $25. This amount could feed a child in Africa for an entire month, according to the World Food Program.

Feed Hungry Children in Africa for an Entire Month

If a family also uses the package of paper towels sitting in the pantry instead of buying a new package, they would save around $20, which would feed a child in Africa for another three weeks. And using the extra cleaning supplies that are stashed under the sink — such as laundry detergent, dishwashing detergent, hand soap and spray cleaners — could save another $25, which would feed yet another child for one month. To sum up: dusting off and using just a few stockpiled paper goods, cleaning supplies and five pounds each of rice and pasta could cut around $90 from the next grocery bill. According to the World Food Program, $15 could feed a hungry child in Africa for one month. With the savings gained simply from using these items and not buying new ones, a person or family could feed six hungry children in Africa for an entire month.

The global need for aid is greater than ever. Prior to the pandemic, around 149 million people suffered from extreme hunger, but as the coronavirus spreads, that number could reach 270 million by December 2020. According to the World Bank, the prevalence of undernourishment in Zambia’s population is over 46%. This means that almost half of all people in Zambia do not have enough to eat. In the Republic of the Congo, 40.4% of people are hungry, while the same is true for 29.4% of Kenyans and 13.4% of Nigerians.

In addition, South Sudan has declared a famine, with an estimated one million children acutely malnourished. As of March 2020, South Sudan is one of the most food-insecure countries in the world, and the pandemic has exacerbated the situation. Around 6.5 million people, or about 51% of its entire population, could face acute food insecurity and require urgent food assistance this year. The need to feed hungry children in Africa has never been more pressing.

Easily Save $90 and Give

Again, simply clearing out those crowded pantries and kitchen shelves and using the stockpiled items could save around $90 in one month. What to do with the savings? Why not simply cross those stockpiled items off of this week’s grocery list and donate the money? The pantry shelves will be less crammed — and that is a good feeling, along with the knowledge that using these stored items has helped to feed hungry children in Africa.