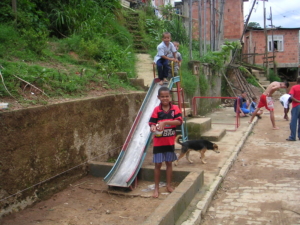 Brazil has experienced urbanization and subsequent economic growth in recent decades, as suggested by its annual GDP growth. However, residents of Brazilian slums, located in the outskirts of urban hotspots, are continuously marginalized.  These slums are known as favelas, with impoverished populations passing 1.5 million in the greater São Paulo and Rio de Janeiro areas. Characterized by high drug-related violence rates, poor infrastructure and lack of opportunities for socio-economic mobility, children of favelas are especially vulnerable to dire living conditions. In particular, favelas struggle to offer quality public education that allows children the opportunity to break away from the poverty cycle. Recent civil society initiatives that support favela children work to combat the root causes of persistent poverty by offering safe spaces and incentivizing further education.

In comparison to students from wealthier communities, most of whom are able to access the country’s superior private system, favela children experience failure rates by third grade over seven times higher than their wealthier peers. Moreover, lack of incentives to pursue education contributes to higher dropout rates. Rather than graduate high school and settle for an average weekly salary of 950 BRL ($177 USD), some favela children end up joining drug gangs in the pursuit of making a sufficient income. For the many children in favelas who do wish to attend school, violence on the streets between drug factions and police has proven to be a disruptive barrier. When crime makes it too dangerous for children to go to class, school is canceled.  Moreover, trauma due to widespread armed violence negatively affects children’s abilities to effectively learn.

EduMais is a Rio de Janeiro-based NGO offering a variety of free after-school educational programs, ranging from English to web and game design. The diverse subjects offered, allow children to engage in extracurricular classes relevant to their interests, and each program incorporates favela-specific methodologies to best ensure enthusiasm and commitment. For example, “positive discipline” avoids punishment and instead adapts children to a classroom by having them help create rules at the beginning of the year. A trauma-sensitive approach ensures that lesson plans are catered toward children’s cognitive abilities. In addition, children enrolled in after-school programs remain in a healthy environment off the streets, and are therefore less likely to use drugs or fail out of school. EduMais encourages its students to value education as an important curiosity that remains useful beyond the classroom setting, and into adulthood. Favela INC teaches English and business courses to adolescents living in the favela of Vidigal, located in southern Rio de Janeiro. Recognizing the region’s lack of entrepreneurial education opportunities, which contributes to residents’ limited abilities to achieve socio-economic mobility, the organization offers young residents free teaching and mentorship programs.  The programs seek to foster well-rounded students ready to face the business world by focusing on four core areas: project planning, financial literacy, digital marketing and personal development.  These programs offer students the tools, resources and newfound entrepreneurial spirit to transform their favelas’ economic and cultural ecosystems. Additionally, Favela INC aims to incentivize its students to pursue higher education after schooling, as only 1-3% of favela residents currently hold a university degree. Students are also connected to networks that they would not have been able to attain without the program, leading to a greater number of job opportunities moving forward.

The historical exclusion of favela residents, as evidenced by the slums’ lack of quality education and widespread drug violence, has prevented many individuals from being able to escape from impoverished conditions. The grassroots initiatives of Favela INC and EduMais in Brazil’s favelas support favela children by providing educational opportunities, incentivizing and inspiring a passion for learning and offering the learned tools to succeed in the 21st-century job market. Through the power of education, community-based teaching aims to alleviate economic insecurity for the next generation of favela adults and tackle Brazil’s root causes of widespread poverty. – Breana Stanski
Photo: Flickr