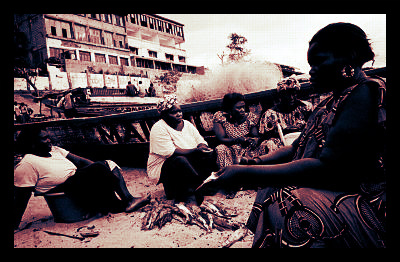 The diplomatic phrase “emerging markets” is a term food companies use to target individuals living in developing countries. Processed food companies, such as KFC, McDonald’s and the like are using developing countries as a way to boost economic growth – the world’s poor is a market that needs to be tapped – and it is the food companies that have taken full advantage of these unchartered territories, bringing poverty and obesity into the public eye.

Take this real life paradox: in South Africa, 60% of women and 25% of children are overweight, yet 20% of the children also suffer from malnutrition. The sudden introduction of fast food joints in developing countries is harmful for a number of reasons. The first is that the world’s poor are unaware of the dangers of processed food because they have not been properly educated about nor introduced to this market in the past.

The second reason is cultural; a fast food joint is a sign of luxury and status in developing countries – so locals may feel more inclined to spend a week’s worth of wages for one meal simply because they appear to be better off than they actually are. In order to get past these potential consequences, locals need to be educated about the nutritional value of cheap, processed food (or lack thereof) otherwise there will be more health crises to accompany the already dire situation in developing countries. Heart disease, diabetes and obesity may very well follow in the path of malnutrition, HIV/AIDS and death that run rampant in developing countries.

If food companies are going to be tapping into this market then the public needs to be educated about the potential consequences of including a diet with cheap, processed foods. Fast food corporations are inherently at an advantage because they have the resources to enter these countries and make incredible profits off of unsuspecting locals.

South Africa is not the only country that has been drastically targeted by this “other” food crisis. Six countries out of the top ten in the world – Kuwait, Lebanon, Qatar and Saudi Arabia are in the lead for prevalence of type 2 diabetes, affecting 11% of the population. All of these countries within the Middle East reveal negative effects of the presence of fast food companies in developing countries. The global poor are seriously lacking in aid, yet when they are seen as a consumer, they are suddenly bombarded with attention from companies who want to make a buck off of them.

Obviously the reality is that fast food companies are in every country – no one is immune – but they are especially harmful for developing countries. Food corporations are tapping into new markets because their markets in the global north have reached a “saturation point” – “that point is reached when processed foods provide 60% of a country’s total calories”. In other words, they want more money and they want it now.

The solutions to this are unclear, but there are some countries that are making great leaps towards remedying the fast food crisis. Brazil for example, has government legislation that calls for healthier school meals for children and the basic right to access healthy food, as outlined in the Brazilian constitution.

Do the developing countries or even the United States attempt what Brazil has done and enact these solutions into legislation to disarm the fast food takeover, or is it through education and awareness that we quell this crisis?