Tag Archive for: Farming in Tajikistan 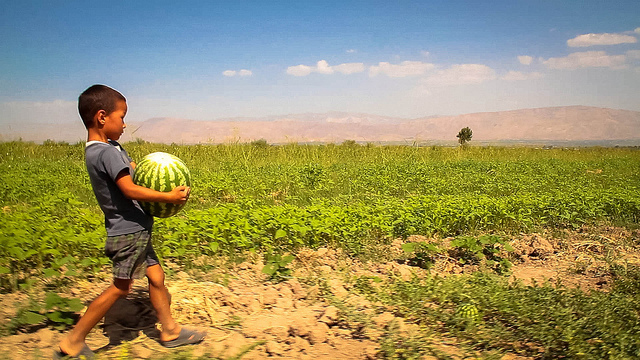 Since its independence, Tajikistan has made great strides in reducing poverty. Between 2000 and early 2009, poverty fell from over 83 to about 47 percent; between 2012 and 2016 it fell further from 37 to 30.3 percent; and since 2012, the poorest regions of the country have made the most progress in poverty reduction. Despite these successes, though, there are still substantial issues regarding sustainable agriculture in Tajikistan.

For instance, Tajikistan suffers from chronic food insecurity. Agriculture accounts for 75 percent of total employment and about a quarter of total GDP; however, just 7 percent of Tajikistan’s land surface is arable. This is a problem as approximately 70 percent of the population lives in rural areas where often the only paid jobs are seasonal agricultural labor on cotton farms or unpaid work tending household farms.

With lack of sustainable agriculture in Tajikistan as the root cause of hunger, USAID has created the Feed the Future initiative to accelerate agricultural development and improve nutrition for Tajiks. The Feed the Future strategy is focused on the Khatlon Province in the southwest region of the country along the border with Afghanistan, as it is a key region for agricultural production. This area contains a large number of people living below the poverty line and the highest rate of undernutrition. With Khatlon’s irrigated lands and cotton production, this site is a promising start to affect water and land reform to create sustainable agriculture in Tajikistan.

This effort has improved agricultural productivity for farmers and agribusiness and contributed to over $2 million in increased farm revenue in 2011. USAID programs trained 30,000 rural residents on land-use rights and provided one-on-one legal aid consultations on land rights to 12,000 people. Understanding their rights to farm has allowed the people more control over crops and land.

Additional support aided in producing sustainable agriculture in Tajikistan. According to the World Bank, the objectives of the Additional Financing for the Second Public Employment for Sustainable Agriculture and Water Management Project for Tajikistan seek to:

These measures will ideally improve food availability and allow food access for low-income people in rural areas. Additional funds from this project will be used to fund public works to help employment for low-income and food insecure population, including migrant workers returning to Tajikistan.

With poverty rates decreasing and projects such as these funding the production of sustainable agriculture in Tajikistan, this nation is hopefully on its way to becoming a safer, stronger and more sustainable country.