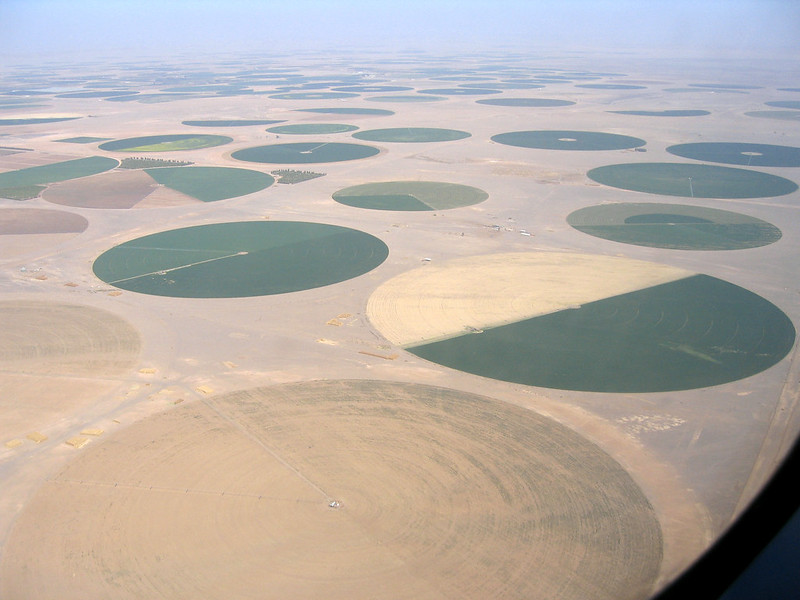 Saudi Arabia, a desert country that saw its fortunes skyrocket due to the discovery of oil, uses its billions of dollars of oil profits to power many parts of its economy and its citizen’s lives. One of these facets is its food supply — the Kingdom imports more than 80% of its necessary food supply with its oil money. Only about 1.5% of the land area of Saudi Arabia is arable, and what agriculture the country does have ends up taking over 80% of the Kingdom’s precious water supply. While the country is currently food-secure, farming in Saudi Arabia has been a crucial area of interest for those who wish to expand Saudi sustainability and shore up potential risks in global food supply network crashes.

Saudi Arabia originally attempted agricultural self-sufficiency with aggressive government subsidies for farmers in the 1980s due to volatile food imports. Poor techniques and mismanagement of water resources forced the reimagining of these efforts in 2007. Now, the Kingdom subsidizes the use of manufactured feed for livestock farmers and encourages vegetable growth using greenhouses and drip irrigation methods. These techniques conserve water while ensuring a more sustainable food supply.

The Saudi government has made concerted efforts to improve its agricultural sector as part of its Vision 2030 program. A top priority for the Kingdom is increasing efficiency in its use of limited natural resources while developing rural areas. Farming is an important source of employment in the Kingdom, so supporting agribusiness in Saudi Arabia not only improves food security but the overall lives of many. Farmers are often some of the poorest individuals in the world, so providing aid and focusing on agricultural efficiency simultaneously fights Saudi hunger and poverty.

The Kingdom is still a major importer of cereals, meat, dairy products and fruits and vegetables, but there has been a growing emphasis on farming in Saudi Arabia as demand for food continues to rise. Following the failed attempts in the 1980s, Saudis have used technology to help make their agricultural industry as efficient as possible. New strategies include the use of satellites to obtain pictures of farmland. The intention of the resulting thermal images is to better understand the relationship between crop growth and overall water use. This helps farmers compare water requirements for different crops and estimate which crop has the highest yield given a certain amount of water.

Another newer form of technology recently came into play in the United Arab Emirates, which shares a border and climate with Saudi Arabia. There, a Norwegian scientist introduced her patented Liquid Nanoclay (LNC) to Emirati desert farms. LNC is a treatment that gives sand a clay coating by mixing nanoparticles of clay with water and binding them with sand particles. Since sand particles are loose, they cannot trap water efficiently, but this treatment allows them to do so. Without using any chemicals, LNC saved water consumption by over 50% in its trial run in the Emirati farms. While it is still quite expensive, international technology like this provides hope for farming in Saudi Arabia, as well as other regions that are water-scarce and relatively reliant on food imports.

High seafood consumption levels have driven the Kingdom to transform and expand its aquaculture industry, or the farming of aquatic species in some body of water like a tank, cage or pond. Aquaculture also saw its start in the 1980s, but today it is the fastest-growing animal food cultivation industry in Saudi Arabia. Government support is a large driver of this — to enhance food security, the government allocated $35 billion toward Vision 2030 projects that include aquaculture funding. Examples of these projects include establishing a seafood processing plant for high-end fish and marine fin-fish cages in the Red Sea in addition to several other initiatives focused on land farming.

Better-informed practices and technological advancement of farming in Saudi Arabia have helped in creating a more sustainable domestic food supply in the Kingdom. Learning from its mistakes in the 1980s, the Saudi government has targeted its subsidies and projects toward more efficient crops and projects, like fish farming. Additionally, it has pivoted away from crops and growth methods having to do with wastewater. Technology like satellite use aides in current Saudi production while new, pioneering technology like Liquid Nanoclay provides hope for the future of Saudi food security and sustainability. Even though food imports still make up the majority of its supply, the Saudi government has recognized this issue and is making a concerted effort into reforming its agriculture industry. These efforts have the potential to help Saudi Arabia avoid a major food and poverty crisis in the future.