Tag Archive for: Farming in Mauritania 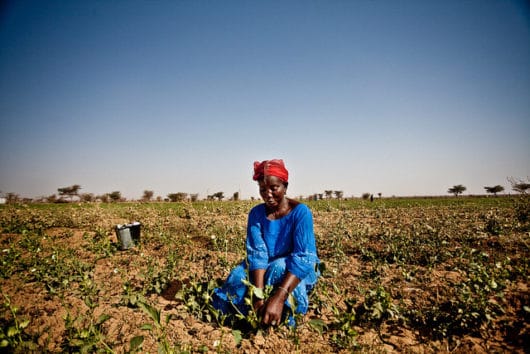 Mauritania is a rather large country in western Africa that has abundant natural resources like iron, oil and natural gas. Unfortunately, water and arable land are not at the top of the list. Nearly two-thirds of the nation is desert. Despite the lack of water, nearly half of the nations 3.8 million people make a living from livestock and cereal grain farming. Sustainable agriculture in Mauritania is essential to put this land to its best use and help the rapidly urbanizing population economically.

According to the FAO, the amount of food produced domestically in Mauritania each year only meets one-third of the country’s food needs, leaving the other 70 percent to be imported from other countries. The FAO has been working to increase crop output by promoting and supporting agriculture farming in Mauritania. One such program is the Integrated Production and Pest Managment Program (the IPPM) in Africa.

This program covers nine other countries in West Africa. Since its inception in 2001 as part of the United Nations new millennium programs, the program has reached over 180,000 farmers, 6,800 in Mauritania. In Mauritania, the IPPM program focuses on simple farming techniques to increase both the quantity and quality of the crop yield each year.

These techniques include teaching farmers how to chose the best seeds to plant along with the optimum distance to plant the seeds from one another. The program also educates farmers about the best use of fertilizers and pesticides. Overuse of these chemicals can pollute the already small water supply and harm the crops. The program also teaches good marketing practices to help with crop sales.

It is not only outside actors that are promoting sustainable agriculture in Mauritania. The government has been helping as well. A report by the Guardian from 2012 explains the government’s new approach since 2011. The plan includes new irrigation techniques, the promotion of new crops, such as rice, and the training of college students in sustainable agriculture techniques through subsidies.

Data from the World Bank in 2013, showed that the program was slowly succeeding; however, too little water was still the biggest issue. The World Bank and the government of Mauritania are still working towards those goals by building off of the natural resources available. According to the CIA, a majority of the economy and foreign investment in Mauritania involves oil and minerals.

A Work In Progress

Data is not easy to find on the success of these programs after 2016. What can be noted, though, is that programs run by the FAO and other international organizations are still fighting for sustainable agriculture in Mauritania. They have been able to sustain using money from mining and oil that is coming in each year.

While these are certainly not the cleanest ways for a government to make money, it is a reliable way for the foreseeable future. The government has already proven that it is willing to spend this money on its people. Hopefully, the government will continue to invest in its people and sustainable agriculture in Mauritania.