Tag Archive for: Farming in Kyrgyzstan 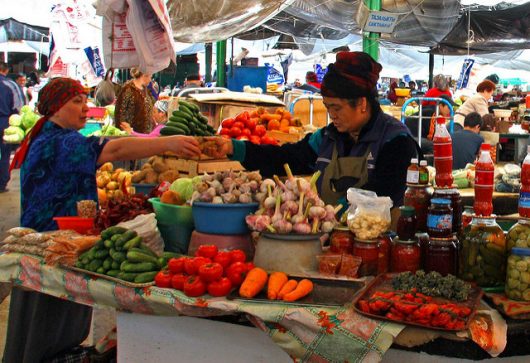 Kyrgyzstan lies in central Asia with much of its land consisting of rugged and mountainous terrain. The country faces harsh winters and hot, arid summers because of its height above sea level that ranges anywhere from 1,000 meters to 3,000 meters. Kyrgyzstan’s land and climate mean there are very few arable locations suitable for growing and sustaining seasonal crops.

With much of their communities being rural, Kyrgyzstan is reliant on their agricultural products as a source of sustenance and income with around 40 percent of laborers focused in agriculture.

A variety of crops grown in Kyrgyzstan are best-suited for the land and climate, including wheat, barley, maize, potatoes, vegetables and fruits, while sugar beets, cotton and tobacco are grown for export.

Kyrgyz focus more on keeping pastures and maintaining herds of livestock for food because of the small amount of land for farming. Livestock mainly consists of sheep, goats and yak, but some regions can support cattle, pigs and chickens.

Both the agricultural practices of the Kyrgyz and the increasing amount of agricultural production needed for the population make sustainable agriculture in Kyrgyzstan a growing and serious issue.

Due to how rural much of the country is, farmers tend to only have access to the most basic of tools, and often lack the knowledge of proper farming methods, meaning what little land there is to be farmed is being dramatically degraded. The herding of livestock has had a similar effect on the land in the form of desertification in overused pastures.

The lack of farmable and healthy pasture land is not the only issue regarding sustainable agriculture in Kyrgyzstan. Kyrgyz can only grow hearty, starchy crops to survive the harsh conditions of the country, and as a result, many are affected by nutritional deficiencies; children can have stunted growth because of a lack of essential vitamins and minerals found in fairer weather crops.

Nutritional deficiencies can also be contributed to rural Kyrgyz simply not being able to afford food — many have low salaries compared to the cost of food from Kyrgyzstan and imports to the country.

Kyrgyzstan often depends on foreign aid to provide what it cannot due to poverty and the agricultural issues the nation faces. Although this aid does fund some food relief programs to provide for Kyrgyz who need it the most, much of the projects and programs focus on the agriculture itself.

USAID programs in the country tend to focus on both making agricultural practices more sustainable, such as how the land is managed and how produce is stored, and on making the agricultural economy of Kyrgyzstan more viable by aiding in the production of in-demand crops for export.

This, in turn, provides farmers with the money needed to purchase better tools and infrastructure for more sustainable practices.

For the time, sustainable agriculture in Kyrgyzstan is a struggle both economically and environmentally, and lack of proper nutrition has a negative impact on the population.

There is hope on the horizon, though, from a variety of programs funded by foreign aid in an attempt to not only provide Kyrgyz with proper nutrition but also make their agricultural practices so sustainable that they will be able to advance themselves in the future.