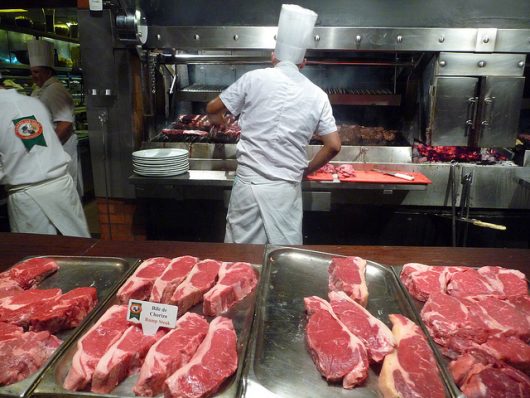 Many scientists have agreed that Earth’s maximum carrying capacity is between 9 and 10 billion people. The world is rapidly approaching this limit; the global population is expected to reach 9 billion by 2050.

Poverty, water and food scarcity and environmental destruction are already major issues which an increase of nearly 2.5 billion people will severely exacerbate. How can the world cope with these crises? One solution is eating fewer animal products.

Eating less meat can reduce poverty and hunger, and benefit the environment. There are economic and health benefits to plant-based diets. The average American consumes 222.2 pounds of red meat and poultry a year; this is roughly double the amount the government recommends.

The amount of eggs and dairy being consumed is also much higher than recommended. Although becoming vegan or vegetarian are the most effective options, even lowering consumption to the recommended guidelines could have a huge impact.

The Negative Effects of Animal Agriculture

Agricultural production uses 38 percent of Earth’s land, or about 3.5 billion acres; nearly 80 percent of this is used for animal agriculture. These 3.5 billion acres can produce enough food for 10 billion vegetarians, but only 2.5 billion Americans who eat meat, as more than half of the world’s harvest is used to feed animals instead of people.

Though 800 million people do not have enough food, livestock are fed “more than 60 percent of [the world’s] corn and barley, and over 97 percent of [its] soymeal.”

Animal production is also incredibly inefficient. Livestock requires large amounts of land, food, water and energy to produce, yet “take more energy and protein from their feed than they return in form of food for people.” Ten pounds of grain are required to produce one pound of meat; in comparison, land used to grow rice can support 19 times more people than land used to produce eggs.

Though some agricultural land is too arid for plant agriculture, much of it could be used to grow plant-based foods for people instead of for animals. Even if only 10-20 percent of the land currently used for animal agriculture was converted to crop production for humans, this would more than make-up for the loss of meat.

Agriculture also uses great amounts of water — accounting for an astonishing 70 percent of global freshwater consumption — and livestock production accounts for the vast majority. According to the International Water Management Institute, 6000 liters of water is required to produce one kilogram of chicken, more than double the amount of water needed to produce one kilogram of cereals.

In addition, reducing meat consumption could improve the economy. If everyone became vegan, the world would save $1.6 billion by 2050. Industrial agriculture exacerbates poverty in developing nations as it is controlled by large corporations — such big organizations drive local farmers out of business.

In fact, local farmers are either forced to become contract growers for large corporations or move to cities, where they often must resort to working in sweatshops. Either path puts them at great risk of exploitation.

Overcrowding in the cities also drives down wages and leads to a rise in poverty and homelessness. A shift to local, more plant-driven production is more sustainable for local farms and can act to reduce poverty.

The Impact of How Eating Less Meat Can Reduce Poverty

Consuming fewer animal products could reduce world hunger and poverty. The United Nations World Food Council estimates that transferring 10-15 percent of cereals fed to livestock to humans is enough to raise the world’s food supply to feed the current population.

In addition, the International Food Policy Research Institute estimates that reducing the amount of meat consumed by 50 percent in high-income countries could result in 3.6 million fewer malnourished children in developing countries.

Eating less meat can reduce poverty and hunger. This is a choice that every individual can make, a choice that — particularly for middle and upper-class people in developed nations — isn’t too difficult. More stores are starting to carry a variety of plant-based products, many of which are less expensive than meat and dairy.

Scientific research and many doctors also agree that plant-based diets are oftentimes more healthful and nutritious than diets heavy in meat and dairy. Though becoming vegan or vegetarian may not be an option for everyone, reducing the number of animal products you consume could have amazing benefits for impoverished communities, for the environment and for the economy.