Tag Archive for: Farming in Bhutan 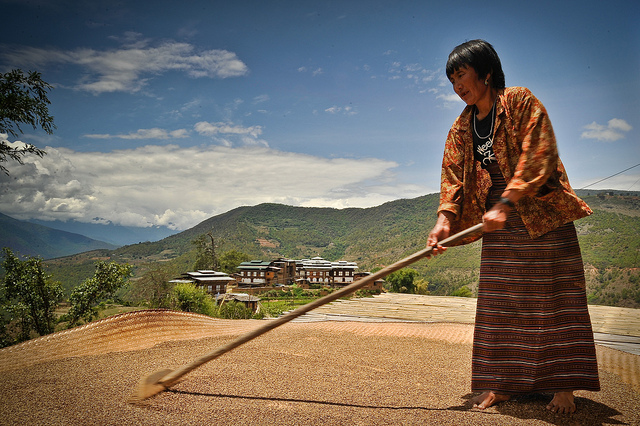 Bhutan is a small, predominately mountainous country landlocked between China and India. It has a population of nearly 760,000 people— about 70 percent of whom live in rural areas. The agricultural sector is central to the Bhutanese economy. Over 65 percent of the population is involved in agriculture and it accounts for over 20 percent of Bhutan’s GDP. Thus, sustainable agriculture in Bhutan is a necessary future development.

The Effects of Climate Change

Most of Bhutan’s rural population depends on subsistence farming. However, climate change is altering ecosystems in ways that have far-reaching, adverse consequences for health and the economy. For example, high-mountain environments, such as that of Bhutan, are particularly vulnerable to changes in climate. This is in part due to the rapid rate of temperature changes which increases with elevation.

The projected effects of climate change in Bhutan include increasingly frequent floods and landslides, receding glaciers and other natural hazards — which all impose barriers to sustainable agriculture development.

In 2017, the Government of Bhutan developed the ‘Enhancing Sustainability and Climate Resilience of Forest and Agricultural Landscape and Community Livelihoods in Bhutan’ project. Its objectives are to strengthen biological corridors, build resilience for adaption to climate change and support sustainable agriculture in Bhutan by 2023.

The United Nation’s Sustainable Development Goals’ target of increasing agricultural productivity by 2030 is also driving the government’s efforts in the agricultural sector.

Although it will be difficult for Bhutan to reach this target due to uneven and mountainous terrain, the country is committed to alleviating poverty and food insecurity through sustainable agriculture development.