Tag Archive for: Farming in Afghanistan 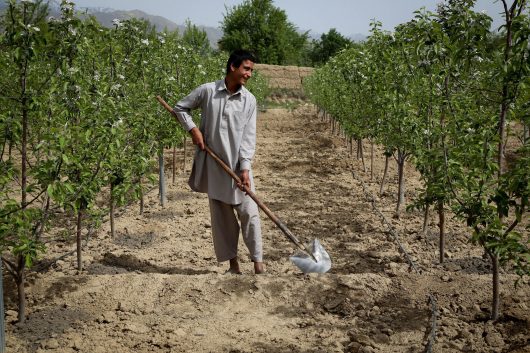 Sustainable agriculture in Afghanistan is hindered by the nation’s reliance on opium. Thirty years ago, prior to decades of conflict, Afghanistan was renowned for its raisins, pomegranates, almonds, apricots and pistachios. Now, it’s the world’s leading exporter of opium. Radical cartels reap the profits of the opium trade, exposing farmers to violence. The opium industry involves risky loans, protection rackets and financial insecurity.

The lack of basic necessities impedes the reestablishment of legal and well-regulated agriculture in Afghanistan. This deficit includes physical security and infrastructure such as roads, electricity and packaging centers. Since the future of Afghanistan can’t be separated from its agriculture industry, agricultural reform is a targeted focus of international aid organizations. The majority of Afghans rely on agriculture as their only source of income, and agriculture is the country’s primary engine of economic growth.

One approach to the development of sustainable agriculture in Afghanistan is through the revival of previously successful cash crops. High value, high volume orchard crops can be up to five times more profitable than opium. The problem lies with startup time; establishing a grape vineyard takes 3-5 years, which is a hard sell compared to annually harvested poppies. Saffron is equally valuable, netting $2000-$3000 per kilogram, compared to $90 for poppies. Unfortunately, issues such as processing and gaining entrance to the international market hinder the industry.

Many experts believe that progress on the road to sustainable agriculture in Afghanistan relies on helping farmers to improve growing the crops to which they’re already accustomed, rather than convincing them to try something new. In August 2012, The World Food Program (WFP) and Act in Change Invest in Potential (ACTED) united under the Purchase for Progress (P4P) initiative to help farmers and cooperatives increase food production and marketing efforts. A project evaluation in July 2015 showed impressive improvements.

P4P irrigation schemes increased wheat production and reduced the impact of droughts. By saving women and children from having to endure long walks for water, irrigation systems contributed to home vegetable farming and increased school attendance. They also stimulated crop diversification, with farmers branching into corn, sesame and soya.

The United States Agency for International Development (USAID) has provided assistance focused on both old and new markets. It has supported Afghan farmers through loans, canals and vouchers for seed, fertilizer, tools and tech. USAID helped 52,000 farmers grow more and higher quality wheat, but also facilitated the international export of fruit, nuts and cashmere valued at more than $66 million. USAID helped 1.1 million households by planting fruit saplings and grape cuttings, by establishing fruit orchards and vineyards and by constructing raisin drying facilities and cold storage rooms.

Slowly, sustainable agriculture in Afghanistan is gaining ground on the opium poppy industry. With international support, Afghanistan is reestablishing its place in the global agricultural market.