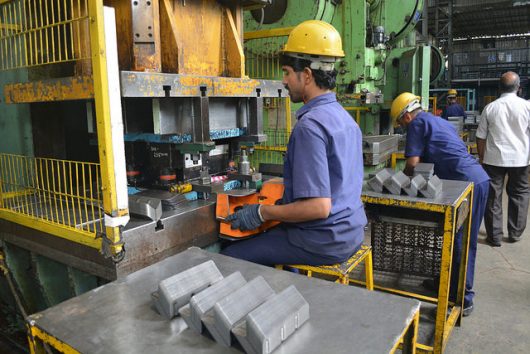 Small- and medium-sized enterprises (SMEs) are estimated to account for more than 90 percent of businesses in the world. SMEs employ around 60 percent of employees in private sectors and add around 50 percent of the world GDP. The benefits of SMEs cannot be overstated–small businesses make big changes.

Mahindra Rise is an example of a company that has far outgrown the small business classification, but it is an inspiring story for up and coming enterprises. Mahindra Rise began in 1945 in India as a steel company but has had the success and adaptability to extend beyond steel production. This company now works in 20 industries over 100 countries and is best known for its vehicle production.

A mobile app based out of Ghana, co-founded by Emmanuel Owusu Addai and Alloysius Attah, Farmerline helps small farm-holders across Africa. A small-scale farm is dependent on market prices, weather and farming techniques, all of which can change quickly. This app, launched in 2013, has helped over 200,000 farmers across four countries increase their harvest by sharing information through the app.

Roya Mahboob helped co-found ACS at the age of 23 in 2010, helping to create a business aimed at creating opportunities for women to be incorporated into Afghanistan’s growing technical culture. Some of what ACS does is build internet classrooms, register users for online education and produce videos by young Afghan women.

Co-founded by husband and wife duo Nichole and Ricardo Thompson in Jamaica, Niritech aims to help students in the Caribbean grow in the subject of digital literacy. Through an online platform, students are connected to instructors and have better access to education in order to become more competitive in the job industry.

Vijay Gnanadeikan created the FaceTagr app to use face recognition to help find and identify missing people. The Chennai IT developer came up with the idea because of the huge amount of children that go missing in India; estimates are that about five children per hour disappear. Right now, the app is being tested by the police and government and, so far, FaceTagr has helped to locate 100 children in India.

Emerging companies understand their local contexts and create niches in order to compete with large multinational corporations. Local companies use their knowledge and understanding to work around institutional voids and an inability for market research. Companies that treat voids as opportunities create profitable enterprises. These small businesses make big changes in their world by not being afraid to compete and discovering the local needs.

Alloysius Attah grew up on one of the many maize farms in the Volta region of Ghana, under his aunt’s care. But after 15 years of farming, Attah knew very well the number of challenges small-scale farmers endure, and he wanted to do something about it.

The main challenge Ghanaian farmers face is that they have little or no access to farming information and services. Only those in the cities of Ghana have access to updates on market prices, growth innovations and weather patterns. For Ghanaian farmers in rural areas like Volta, predicting even the next day’s weather is difficult, and could mean a huge difference in revenue for the farm. Even when this information was available, it is usually not in languages farmers could understand, given Ghana’s vast language and dialect diversity.

Almost half of Ghana’s working population and its land are involved in farming.  TheWorld Bank suggests that around 80 percent of agricultural output in Ghana comes from small-scale farms. Food security in Ghana is imperative to the country’s stability. When these farms succeed, the whole country succeeds. When they don’t, thousands of people struggle to get enough food to eat.

Attah wanted a way to help farmers receive the information they needed to help their farms thrive. As a young adult, he left his aunt’s farm and started learning how to code, pioneering a career in technology. In 2011, he realized cell phones were the answer. Cellular devices were becoming more popular in Ghana, and most farmers had access to at least a basic cell phone. Even the simplest devices could deliver prerecorded messages with the latest information on productive farming.

Attah began his start-up, Farmerline, and today, it has more than 200,000 farmers using its services to increase food security in Ghana and nine other African countries. The platform offers farmers several services, such as market prices, agricultural tips and weather forecasts in their own local language. It also connects potential buyers and businesses to the farmers, such as NGOs, global food companies and more through farm data, auditing, mapping and profiling services.

The company estimates that some farmers increased their revenues by more than 50 percent using Farmerline. This is a huge return, seeing that Farmerline only costs farmers $2-3 for a few months. The company created a gigantic agricultural network that reaches even more people in need of food. Farmerline broke down literature and language barriers in Ghana. Furthermore, because 80 percent of domestic food production comes from small-scale farms, food security in Ghana is steadily rising.

The company’s success was recognized with the King Baudouin African Development Prize. Along with two other start-ups, Farmerline won 367,000 Ghana Cedi to fund its business in early 2017. Attah is ecstatic with the win, and hopes to use the prize money to expand his business. The field of entrepreneurship in Africa is tricky, given high taxes and a lack of investors. Attah says there are plenty of successful start-ups in Africa, but transforming into a successful long-term business is nearly impossible without significant funding.

Up until now, Farmerline succeeded on the revenues of its customers and partnering NGOs, but the prize money will give it a new boost to take the company to the next level. Several investors and partners from other countries, including Mexico and Peru, have shown an interest in Farmerline’s technology. Attah welcomes the change. He ambitiously wants to help farmers all over the world. Attah hopes by 2020 he can have one million farmers using Farmerline and even more people breaking out of the poverty cycle as food security in Ghana and across the world improves. 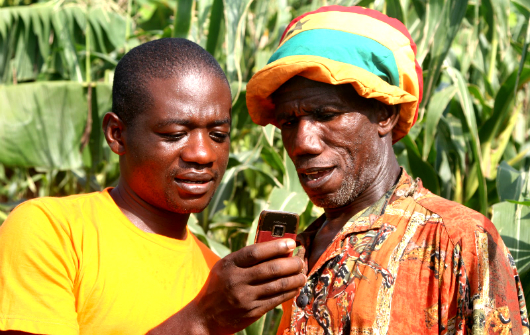 Africa has a large amount of untapped potential in the agricultural market. If resources were utilized correctly, it could feed itself as well as parts of other continents.

Today, Africa still relies on food imports from abroad to feed its rising population. The UN has warned that if African farming continues at its current rate, by 2050 the continent will only be fulfilling 13 percent of its food needs.

Farmers continuously fail to take advantage of the land’s natural advantages due to their lack of access to information on finance and marketing.

In Ghana, there is only one agricultural extension officer for 2,000 farmers. These officers provide farmers with training and information but are unable to communicate with each of them enough to help farmers improve due to a lack of time and resources.

Alloysius Attah, a 26-year-old Ghanaian entrepreneur, has invented an innovative solution to farmers’ lack of access to information that will increase yields and profits of local farmers.

In 2013, he founded the company Farmerline, a phone app that provides smallholder farmers with information in the form of voicemails and text messages.

“Farmers receive important updates on market prices, weather forecasts, financing, input dealers, and farming tips. It also links them to agribusinesses and organizations who have previously struggled to access them” explains How We Made it In Africa.

Farmerline has been successful— in only two years, it is helping 200,000 farmers across Ghana, Malawi, Sierra Leone, Cameroon and Nigeria. The company plans to expand across Eastern Africa at the end of 2015.

When Attah initially started his application, he discovered that many of the farmers are illiterate. They could not read text message notifications. “So we moved to voice messages. Now our application sends information to farmers in any language – such as Swahili or any of the local languages in Ghana,” said Attah to African business publication How we Made it in Africa.

The application is engineered specifically for individual farmers. Weather forecasts are reported based on the GPS coordinates of where a farmer’s farm is located. Agronomic this are based around the season of the year as well as the type of crop the farmer is growing.

Attah’s passion for agricultural improvement in Africa began when he was five. He lived with his aunt who was a small-scale, rural farmer in Ghana. He witnessed the problems she and so many others like her faced daily.

In college, Attah stumbled upon an agricultural class. “I actually thought the course was going to be about oil, gas and all that. But I soon realized it was about wildlife, forestry and agriculture. It is like fate somehow placed me in the path of agriculture” he told How We Made It in Africa.

“Coming from a normal rural Ghanaian background of limited resources, to becoming someone who can overcome challenges and use those limited resources to solve problems in society, makes my family and community proud,” said Attah.

Sources: Farmer Line, How We Made It In Africa
Photo: Techmoran