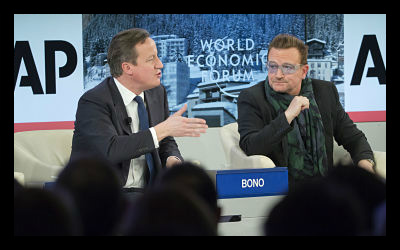 Bono, lead performer of the band U2, is as much of an activist as he is a rockstar.

Bono has drawn attention to the global poverty endemic, enacting a call to action. He claims he is a “factivist,” for he believes in evidence-based activism. In a recent interview with CNN, Bono explained that factivism is a virtuous, data-based virus. He said, “spread it, share it, pass it on … by doing so, you will join us and countless others in what I truly believe is the greatest journey ever taken — the ever-demanding journey of equality.”

According to The Guardian, Bono states, “The rate [of poverty] is still too high … there’s still work to do. But it’s mind-blowing stuff.” He continued to state that the rate could hit zero by 2030. “For number crunchers like us, that’s the erogenous zone. It’s fair to say I’m sexually aroused by the collating of data.”

The Irish front man of U2 began his work with poverty after viewing a series of performances called “The Secret Policeman’s Ball.” He then collaborated with Amnesty International to launch the “Conspiracy of Hope” tour with Sting. As a result of his work, Bono was invited to Ethiopia by World Vision, where he developed an education program with his wife, Ali, addressing health, hygiene and music. Inspired by his work in Ethiopia, Bono pursued his activism in Nicaragua and El Salvador to work with children and draw attention to world conflicts.

Bono utilizes his passion for music to aid his passion for equality. He wrote a song called “Silver and Gold” for Artists Against Apartheid and participated in Van Zandt’s anti-apartheid single “Sun City.” In addition, Bono attended the Festival Against Racism in Hamburg, Germany with The Edge. The event consisted of a concert, a press conference, a theatrical event and a debate on the subject of anti-racism.

Bono has been a leader in the fight against poverty, making significant contributions to the ONE Campaign, RED, EDUN and DATA.

Making outstanding donations to charity, he has received three nominations for the Nobel Peace Prize, and was knighted by the Queen of England in 2007.

Bono’s TED Talk has compacted twenty-five years of anti-poverty campaigning into a ten minute presentation for a TED conference which was held this past February. The result is a passionate call for people to stay involved and stay informed about all the great work that is and has been happening in the fight against extreme poverty.

Much of the progress that has been made does not make the news but Bono sees how people, technology, and the sharing of information is turning inequality on its head; sighting the Arab Spring as a momentous shift in history. He emphasizes how facts change minds and hearts, bring new awareness and action, bring better action, and bring change in a phenomenon he names “factivism.”

The population of people living on less than $1.25 per day has been cut in half in the last 20 years, and the facts show that this extreme poverty can be cut to virtually zero within a generation — worldwide. Bono encourages everyone to continue their efforts for lasting progress by: