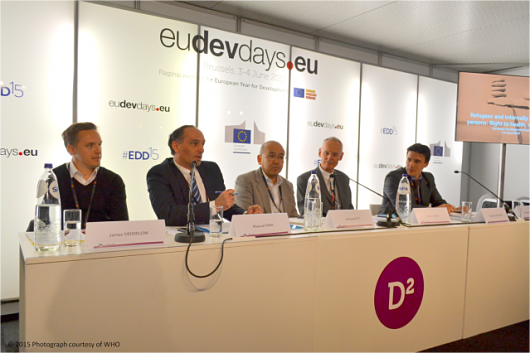 On June 3-4, 2015, the European Development Days forum took place in Brussels. The focus of this forum was global development and cooperation. Across the courtyard of the European Parliament, at the scene of the forum, was the European Year for Development slogan that read “Our world. Our dignity. Our future.”

During the opening address, President of Luxembourg Xavier Bettel encouraged political leaders and citizens alike to play their part in the development of nations. He made the astute observation that “development co-operation is not a luxury” and urged listeners to act fast.

Indeed, there is no time like the present. The European Commission’s President Jean-Claude Juncker said that the 2015 European Development Days were occurring at a critical time for the future of the world. He argued that for the international community, it is a “now or never” moment when action must be taken.

At the forum, over 500 speakers, experts, practitioners and activists debated over which areas of development deserve the most attention in the upcoming year. Participants from over 140 countries representing 1,200 organizations worked together to create unified goals in the global development arena.

International cooperation and collaboration is necessary now more than ever before. Looking ahead at the International Conference on Financing for Development in July, the U.N. conference on the Post-2015 Sustainable Development Goals in September and the Climate Change Conference in December, actors need to begin focusing on issue-alignment.

MEP Linda McAvan makes a crucial distinction. She reminds us all that development is more than just wealthy countries giving donations to those in need. We must achieve a worldwide commitment to collaboratively work to eradicate poverty, tackling the issue at its deepest roots.

As the world’s leading donor of development aid, the European Union (EU) must set the international standard. It is important to remember, however, that it is a two-way street. MEP Charles Goernes points out that developing nations must “take ownership” of their own development, with support from donor countries.

Goernes hopes that the chaos of the Mediterranean migrant crisis has created a sense of urgency for Europe to play a more active role in global development. The problem has become almost impossible to ignore. An ever-increasing number of lives have been lost because of international development disparity.

Goal 8 of the proposed Post-2015 Agenda accordingly targets the protection and safety of migrants. In order to best tackle the problem, the EU will need to closely examine the causes of the migrant crisis. At the core of this international crisis lies the overwhelming need for developmental aid in many non-European countries.

By more efficiently addressing the issue of developmental disparity across borders, the global fight against poverty will be greatly advanced. The year 2015 could very well be pivotal for global development and wealth disparity. Cooperation, focus and commitment from the world’s most capable could bring groundbreaking improvements for the world’s most deprived. For now, the beginnings of development in poorer nations signify a step in the right direction toward poverty eradication.