Without any other choice, people are fleeing the country of Eritrea. The Eritrean government has been involved in several forms of human rights violations since 1993, when they broke off from Ethiopia. It is described by Human Rights Watch as “one of the most closed countries” in the world.

Reporters without Borders rank the country last on their freedom index and Amnesty International believes the country has imprisoned more than 10,000 citizens for political reasons since 1993. Despite all these violations, the government claims they have made progress in working to reach six of eight of the U.N.’s anti-poverty goals.

As a result of these rights violations, previous estimates show that Ethiopia had been experiencing a monthly inflow of 2,000 refugees. Italy has experienced an inflow of 13,000 Eritrean refugees since the beginning of the year and Sudan has also seen a rise in those seeking asylum.

More recent estimates by U.N. investigators, however, average the number at 4,000. Investigators describe this 50 percent spike as “shocking” and a sign that the situation has gotten worse since last year’s U.N. report.

Accusations of abuse by the Eritrean government include indefinite service in the country’s army, detainment of citizens without cause, secret imprisonment, torture and forced labor. The government has also enforced guilt by association laws for families of those who flee, resulting in fines or detainment. Many die while in detainment due to appalling living conditions including extreme heat, poor hygiene and very little food.

The path to freedom is a rocky journey often involving the crossing of deserts and seas. Many drown in the sea or die from the extreme heat in the desert, yet their hope and lack of choice drives their journey as they risk life and limb to reach free land.

Poverty provides opportunities for oppression and also creates the conditions necessary for oppression to thrive. When people of the world do not have the resources necessary to retaliate or the power necessary to change policy, they are left with few options. Often, the best choice is to leave, and so they do, often in the face of great danger. 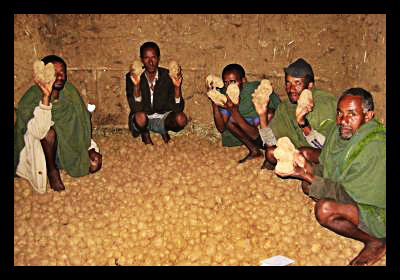 Dessie Zuria, a district in Ethiopia, suffers from a multitude of problems that negatively affect the ability of its farmers to provide food for residents. Approximately 90 percent of the district’s population depends on rain to water crops, but rainfall in the area is enormously inconsistent and inadequate, often leading to drought.

Further complicating the district’s food concerns, Dessie Zuria is located 2,400 meters above sea level.  Due to the district’s high altitude, the farmers in Dessie Zuria are severely limited in the types of crops that can be grown. The lack of rainfall combined with the area’s high altitude has restricted many of Dessie Zuria’s farmers to the production of one crop: barley. While it is certainly a positive factor that the area is able to produce any food in the environmental conditions it faces, the production of barley as primary crop opens up Dessie Zuria’s farmers and residents to a new set of problems.

The growth of barley is highly vulnerable in water-restricted areas. Despite the obvious difficulties in barley as a food-secure crop, the high altitude has restricted the options available to the farmers. This dilemma has led to a continued reliance on barley. Since the crop yields are inadequate when rainfall is low, a constant problem in the area, chronic malnutrition has skyrocketed, reaching a rate of 54 percent. The rate of chronic malnutrition in Dessie Zuria is 10 percent higher than the national average.

The introduction of the potato has led to increased profits for farmers in Dessie Zuria and has also led to better nutrition. Seid Muhie, a Dessie Zuria farmer, stated that the potato has allowed him to feed his family multiple times a week and has also provided him with a better way to support his family. The significant impact the introduction of the potato has had in Dessie Zuria has not gone unnoticed. According to All Africa, Irish food scientists are working with European partners to help the entire nation of Ethiopia develop sustainable seed potato systems. The project was set up as part of the new policy on international food policy developed by Teagasc, Ireland’s agriculture and food development authority. Once the research produces positive results, the findings will be disseminated to help local subsistence farmers.

The development of the potato as a sustainable food source in Ethiopia serves as an important reminder of the significant benefits that crop diversification can provide to areas struggling with food security. Better policy and improved research are needed to ensure that areas with inadequate natural resources and less than ideal climate conditions can still find a sustainable food source for its people.