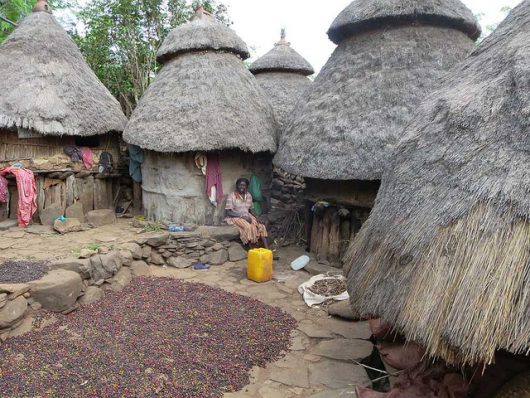 Ethiopia has spent the past 30 years moving forward from a famine of biblical proportions by expanding an unlikely market. The coffee market in Ethiopia has experienced recent growth, improving both the economy and the lives of people in coffee production.

However, Ethiopia’s past is marked by tragedy. In 1984, BBC reporters Michael Buerk and Mike Wooldridge brought the Western world’s attention to the “biblical famine” devastating the country. More than one million Ethiopians perished due to this tragedy, and over eight million were affected.

Coffee holds great social and cultural value in Ethiopia due to its significance in the economy. The recent growth in the coffee market in Ethiopia has helped over 15 million people who directly or indirectly derive their livelihoods off of coffee production, according to the USDA.

Generations of farmers had been growing coffee in this area for generations, earning a meager income. But in 2010, over 100 local coffee farmers came together to form Duromina in order to improve their lives.

Duromina skyrocketed, making good money for all of its farmers. With the new income, the farmers decided to invest their money into their community.

The nearby river often swells, making it impossible to get to the nearest clinic from their community. To fix this problem, the farmers invested in a bridge so everyone could have access to the clinic at all times and would not hurt themselves trying to cross the flooded river. After building the bridge, the farmers then invested in their homes and their children’s future.

The transformation Ethiopia went through is evident not only within communities, but also in the copious amounts of lush green farmlands and forests where there were once drought-stricken dustbowls. Individuals who saw Ethiopia 30 years ago are astonished and inspired by the improvements, according to World Vision.