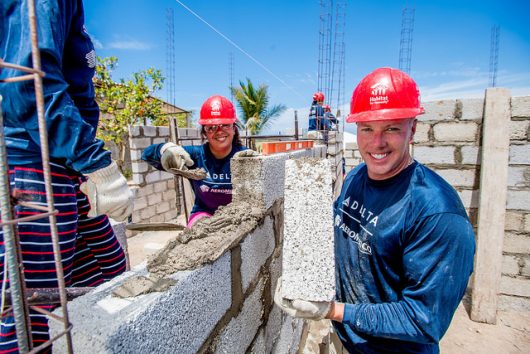 Habitat for Humanity has become an international organization well-known for its hands-on approach to eradicating poverty through affordable housing. However, a common misconception is that Jimmy Carter was the founder of Habitat for Humanity.

In reality, the seedling for this idea started on a small intentional community in Americus, Georgia, was cultivated by Millard Fuller, and then blossomed into the international powerhouse of eradicating poverty by Jimmy Carter.

Clarence Jordan was a farmer and an ordained minister who founded Koinonia Farm in the early 1940s. His early mission of this farm was to live in community with people from all backgrounds and guard against materialism and militarism. He fulfilled this mission by living in community with folk of many backgrounds, continuing to thrive in the midst of communist allegations in the 1950s and racial turmoil in the 1960s.

In these tumultuous times, Clarence Jordan cherished simple living and sought to redefine the farm’s purpose. He planted the seed of “partnership housing” and “Fund for Humanity” in the minds of the community at Koinonia Farm. In fact, Jordan stated in a letter to the Koinonians:

“Partnership Housing is concerned with the idea that the urban ghetto is to a considerable extent the product of rural displacement. People don’t move to the city unless living in the country has become intolerable or impossible. They do not voluntarily choose the degrading life in the big city slums; it is forced upon them. If the land in the country is made available to them on which to build a decent house, … they’ll stay put.”

Millard Fuller and Habitat for Humanity

Millard Fuller cultivated Clarence Jordan’s idea and expanded the goal of eradicating poverty through affordable housing through his endeavors of establishing Habitat for Humanity International. His story of reaching the farm is quite special. In 1965, Millard Fuller visited Koinonia Farm for the first time during a life crisis.

He and his wife had recently left a successful business in Alabama to begin a life of service and fulfillment. Together, Fuller and Jordan brought to fruition the plan of partnership housing through the “Fund for Humanity,” where the “money would come from the new homeowners’ house payments, no-interest loans provided by supporters and money earned from fundraising activities. The monies in the Fund for Humanity would be used to build more houses.”

Also, in this concept, volunteers and homeowners would work together to build the homes. Koinonia allotted 42 half-acre house sites in 1968. Sadly, this first project in the fruition of Habitat for Humanity was finished after Clarence Jordan’s death in 1969.

Millard and Linda Fuller continued to live on Clarence Jordan’s legacy. In 1973, they extended the concept of building decent and affordable housing outside of the United States on their trip to Zaire (now the Democratic Republic of Congo). After three years of work abroad, the Fullers returned ambitious to expand Habitat for Humanity to the international arena and in 1976, Habitat for Humanity International was born.

Jimmy Carter and his Work Project

Former President Jimmy Carter started his famous work project in September 1984 to New York where they served 19 families in need. Since then, they have led 35 work projects, and collaborated with 101,276 volunteers in 14 countries to build, renovate and repair 4,290 homes.

Even as Jimmy Carter battled cancer and other health issues, he still continues to serve in this capacity as a leader of work projects. New York Times reported that during the 2017 build he became dehydrated and was taken to the hospital, but that did not stop him from embarking on his 2018 work project to Indiana later this year.

Since Former President Carter left office, he has dedicated his time to fighting injustices and human rights, such as eradicating poverty through affordable housing.

Today, Habitat for Humanity has grown tremendously — there are local affiliates and ReStore donation centers in 1,400 communities. College campus chapters have even started to develop where college students can take an alternative break trip and serve in one of these communities.

There are national events that focus on certain types of builds, and they even provide financial education for their homeowners. This organization proves how a small idea from one person can turn into an international organization that is eradicating poverty through affordable housing.