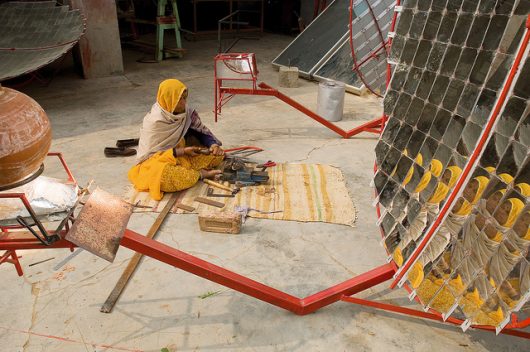 A business partnership between law firm Hogan Lovells and Barefoot College seeks to help women in the developing world rise out of poverty by offering programs in solar panel engineering. Barefoot College, founded in 1972, is a college built by and for the rural poor, whose main objective is “to demystify and decentralise technology and put new tools in the hands of the rural poor with a singular objective of spreading self-sufficiency and sustainability.” This initiative, conducted in partnership with Hogan Lovells, focuses on teaching impoverished women solar panel engineering. The objective is for these women to bring the technology back to their villages and provide a renewable light source to destitute rural areas.

The project estimates it will bring clean, renewable power to over 200,000 people by training 400 women at five centres in Latin America, Africa and the Pacific Islands. Since 2008, when the initiative started, the college estimates it has trained 1084 women, or ‘solar mamas’ as they call them, from 83 different countries in solar panel installation and maintenance. Hogan Lovells is now providing Barefoot with pro bono legal advice and financial backing to help with the most recent expansion of the program.

Although a majority of the women are illiterate, through sign language and color-coded textbooks they are taught how to create, install and maintain solar panels for their community. Not only does this help bring a renewable power source to thousands of destitute villages, but by teaching impoverished women solar panel engineering, it helps to develop gender equality in these regions. The ‘solar mamas’ become respected community advisers and hold a high position as the installers and maintainers of a village’s main power source.

Installing solar panels also brings an array of other benefits to poor, rural, areas. It replaces the use of toxic kerosene, allowing children to study at night with the use of lamps, and family incomes tend to rise, since they pay less than what they paid for kerosene, batteries, candles, etc. Barefoot estimates that it has replaced over 500 million litres of the highly toxic and flammable kerosene since the program started.

Barefoot College and its ‘solar mama’ initiative in cooperation with Hogan Lovells is an example of the innovative progress made by non-governmental institutions in the race to meet the U.N’s Sustainable Development Goals. By training impoverished women in solar panel engineering, Barefoot, in a single program, addresses seven of the 17 goals, including tackling poverty, promoting gender equality and developing affordable and clean energy. It is an example to be followed. 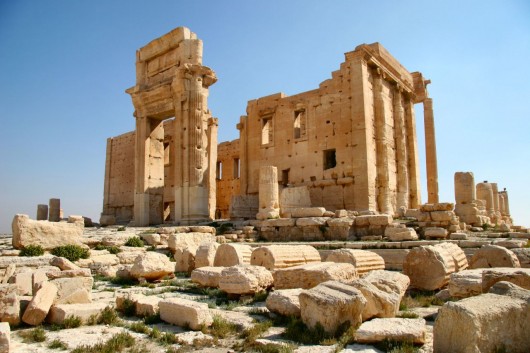 The budget allocated for 3D printing in the Middle East and Africa (MEA) is reported to increase from $47 million to $1.3 billion over the 2015-2019 period, according to the Semiannual 3D Printing Guide published by the International Data Corporation (IDC). This guide is a framework that provides IT technicians with a focused perspective on where 3D printing expenditure should be heading over the next five years.

The growing use of 3D printing in MEA, as stated in an article by IT News for Africa on Feb.24, 2016, is predicted to have positive impacts on various fields including the manufacturing industry. According to IDC’s analysis, 3D printing enables products to be customized based on individual markets’ needs.

While the research firm expects to see Asia-Pacific as the major contributor to the implementation of this new technology, it indicates that “MEA will maintain its position as a frontrunner in this space, and its share of global 3D printing spend is expected to grow from 4.3 percent in 2014 to 5.0 percent by 2019.”

Martin Kuban, a senior research analyst with IDC Manufacturing Insights, further explained the versatility of the 3D printing technology, stating that apart from the straightforward applications within the automotive and aerospace industries, tech experts are anticipating “innovative and potentially transformative 3D printing deployments among medical suppliers, electronics manufacturers, and tools and components manufacturers.”

Recently, 3D printing in the Middle East and Africa has demonstrated its transformative powers. On Dec. 28, 2015, the BBC reported a groundbreaking initiative by the Institute of Digital Archaeology: A destroyed Syrian heritage site will be recreated from 2D images using a 3D printer.

The heritage site, a 2,000-year-old arch in the ancient city of Palmyra, Syria, was destroyed by the Islamic State group last summer. The Institute of Digital Archaeology, led by Harvard University, the University of Oxford and the Museum of the Future in Dubai will 3D-print replicas of this historic monument during UNESCO’s World Heritage Week in April of this year, as reported by the Washington Post in a Jan. 7, 2016 article.

The forthcoming recreation of the Arch of Palmyra, according to the Washington Post, belongs to a larger effort called the Million Image Database made possible by the Institute for Digital Archaeology and UNESCO. This collaboration aims to preserve and restore historical landmarks in the Middle East and Africa, as stated on the project’s website.

In an interview with the Washington Post, Alexy Karenowska, director of technology at the Institute for Digital Archaeology, said that the ultimate goal of the project is “to draw international attention to the global crisis surrounding the looting and destruction of cultural heritage objects and architecture.” Karenowska believes that it is important “to celebrate the beauty and significance of these objects to the everyday lives of modern people.”

This event demonstrates only one way in which the development of 3D printing in the Middle East and Africa can have a huge impact. Given increasing financial support, this advanced tool has the power to affect the economy, education, health, history and culture. 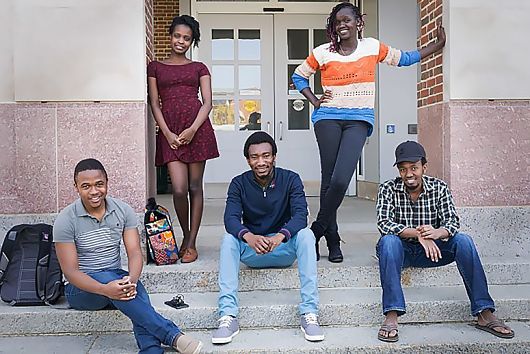 There are countless efforts being made and programs being conducted across the globe to alleviate global poverty. Most of these address immediate concerns that go along with the crisis: improving medical care, providing food, building shelter and bringing in energy. However, in order to fully put an end to global poverty, proactive measures must be put into place. Many experts are calling for major investments in science education in developing parts of the world in order to empower generations to come by helping them move forward and out of their economic hardships.

Countries that invest in science and technology sectors will reduce income inequality, alleviate extreme poverty and improve national health. Experts state that 3.5 percent of a country’s GDP should be invested in science, technology and innovation (STI) industries. The problem is, however, that many developing countries have little to no STI sector in their economies. The way to build these sectors is through science, technology, engineering and mathematics education, or STEM education for short.

There are two major ways that STEM education is being implemented to aid the developing world. The first is through aid programs on the ground in developing countries. Companies like Intel and Microsoft have been investing in science and technology schools throughout Africa and Latin America. The companies are working in conjunction with programs like Women in Science, Engineers without Borders and the Bill and Melinda Gates Foundation to provide science education to thousands of young people.

The second way STEM is being implemented to aid the developing world is occurring right here at home. The U.S. is home to the largest number of foreign undergraduates in the world, many of whom come to study STEM subjects. Dartmouth University stands out in particular. The Ivy League school has just launched a $35 million King Scholarship program, which seeks foreign students who wish to study with the intention of alleviating poverty in their home countries. Scholarships are given to candidates who themselves come from rural, developing areas of the world.

A better-informed society has better access to food, water, improved shelter and efficient sustainable energy. The only way to create a more informed society is through education. Poverty relief is necessary for a better world, and in the current state, poverty-stricken nations are reliant on foreign aid. But there is a chance that one day, through education, these nations can become empowered and self-sufficient in tackling this global crisis. 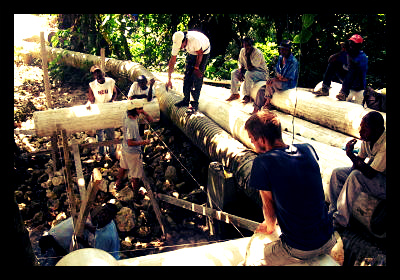 What makes the CEDC so unique is its focus on service-learning and community development abroad. The program promotes civic duty and international leadership through targeted civil engineering projects.

The CEDC allows its scholars to aid communities on and around the Central Plateau of Haiti in the design and implementation of sustainable infrastructure. These projects include the creation and improvement of water treatment facilities, road designs and waste management plants.

Each of these elements of infrastructure is essential to human health, quality of life and to the economic development of Haiti. The Central Plateau is one of the most impoverished and disaster-prone regions in the world and without the aid of programs like the CEDC, Haiti would have little opportunity to better the lives of its people.

Beyond development, the CEDC aims to prepare the peoples of Haiti to become integral to ensuring the success of this program. While Clemson University scholars and engineers receive the opportunity to gain hands-on experience in the developing world, many Haitian students in the area shadow the engineers and learn the skills necessary to continue their work.

For this reason the CEDC has garnered a lot of attention and created many strategic partnerships with NGOs, private industries and Haitian schools.

The Andrew Heiskell Awards recognize the CEDCs tremendous commitment to, and investment in, both education and community development. According to the IIE, the Heiskell awards are aimed at, “highlighting initiatives that remove institutional barriers and broaden the base of participation in international teaching and learning on campus.” 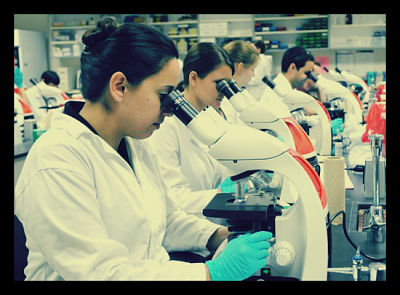 Guano, gold, silver, rubber, wool and other natural resources currently make up the largest exports of South America. However, due to the instability of natural resources, many economists believe that reversing the deficit in the STEMs (Science, Technology, Engineering, and Math) and focusing on research and development may solve the region’s poverty.

Fortunately, Brazil has been leading the region in tech development with a large increase in patents and academic papers. Brazil intends to continue this development by providing  75,000 students with science and technology scholarships to study at top universities by 2014.

While many governments realize the benefits of South American STEM jobs, Rovira believes the private sector needs to do more to generate tech jobs and facilitate technological growth.