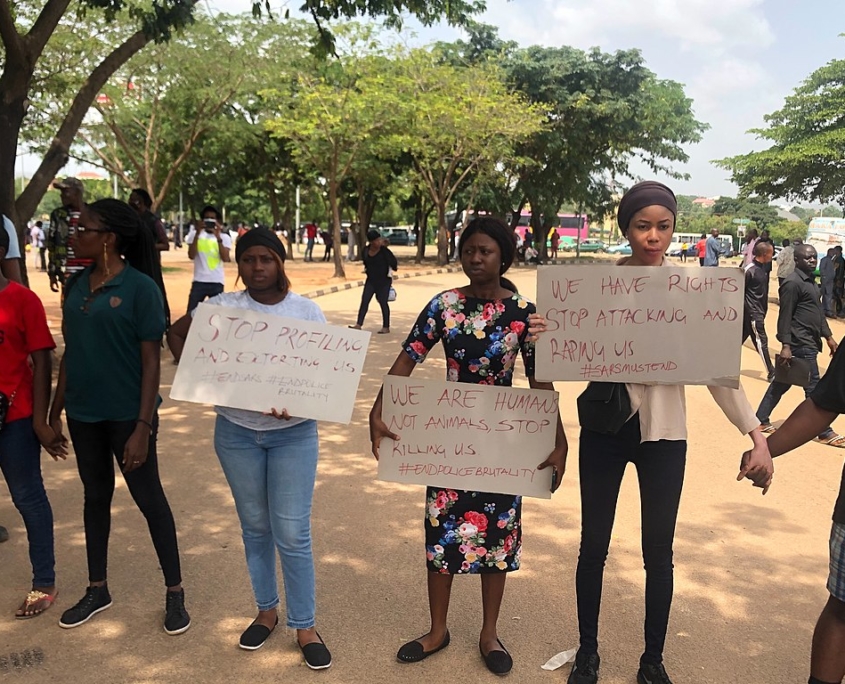 Social media is becoming a diversified platform that has been vital to the fight against police brutality in Nigeria. Nigerian citizens have experienced years of unjust violence by the Special Anti-Robbery Squad (SARS), including armed robberies, rapes, torture and unsystematic killings. For Nigerian citizens, media censorship on television has led to the circulation of the hashtag #EndSARS on social media sites. People have taken to Twitter, Instagram, Tik Tok and other platforms to post news and videos of the violence incurred. Through the #EndSARS movement in Nigeria, young Nigerian activists are emerging and are critical to the new wave of international awareness.

The Special Anti-Robbery Squad, a police force, was assembled in 1992 by the Nigerian Government to cope with the failings of the Nigerian Police Force. Emboldened by their power to arrest and monitor crimes, the group has increasingly used its authority to engage in dangerous tactics and fear-mongering.

Among protests and complaints, Amnesty International has investigated and determined numerous unlawful killings and human rights abuses. 2015 marked the first set of promises, made by Nigerian President Buhari, to disband and restructure SARS. However, after years of promising reform to appease citizens, the government has not implemented any effective actions to deter the unit.

SARS has promoted corruption and violence toward citizens, especially against an evolving population of youth. There are many reports of youth being harassed by SARS for their new technology, clothing styles, hairstyles and tattoos. In protest, Nigeria’s youth have been leaders and catalysts in organizing the #EndSARS movement. A viral video in December 2017 depicted a murder committed by SARS, and since then youth have consistently used social media to document violence done by SARS. A revival of the hashtag #EndSARS occurred in October 2020 and has created a resurgence of conversation about the issue.

Leading the International Awareness of SARS

With a limitation on media coverage of protests and SARS criticism, Nigerians have taken to social media to spread the message. Protestors have created a unified voice among supporters without endorsing an individual leader of the movement. Private citizens with their phones are the main information source and record first-hand videos of the violence. For example, an Instagram Live of protestors being shot and wounded by Nigerian military officials garnered global media coverage. The shift from traditional media to social media has been an advantage to the #EndSARS movement.

The grassroots movement has diverted from the repressive Nigerian media and toward an inclusive citizen-led campaign online. Twitter, Instagram and Tik Tok are serving as major platforms for Nigerians to organize protests, volunteer and donate. Twitter users offered to pay phone bills of protestors to continue the spread of information online. Other protestors began crowdfunding donations to supply food to protestors, posting specific details relating to peaceful protests or sharing medical aid, legal aid and mental health hotlines. The variety of evidence and resources circulating on social media has bolstered the international podium of #EndSARS.

The turmoil of police brutality in Nigeria has been fiercely combatted by a new generation of youth activists. Social media has ignited an international drive to end the corruption of the Special Anti-Robbery Squad. Tangible change is coming about with protests and aid spread globally on social media. The Nigerian youth are using technology to their advantage and are moving to end a period of instability through the #EndSARS movement in Nigeria.