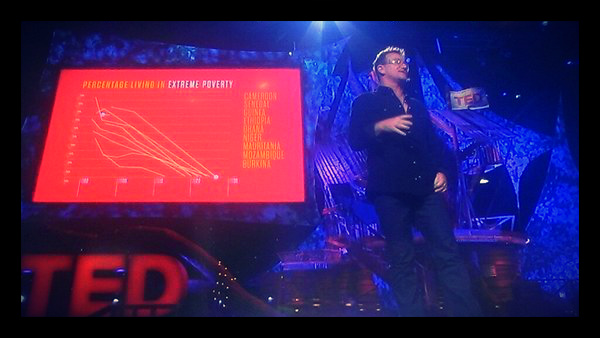 During the 2013 TED Conference in Long Beach, CA, U2 lead singer and anti-poverty activist Bono spoke about successes in the fight against global poverty and made predictions for the future.

Bono, the founder of the anti-poverty organization One and long-time ally of the world’s poor, stated that he will temporarily retire from being a rock star to become a “factivist” – one who uses facts and evidence to support activist causes. The facts are, in this case, statistics on declining global poverty rates. Bono advocates factivism as just one way that we can all work to help end global poverty.

A few of the most encouraging statistics:

– 7,256 fewer children under the age of five are dying each day.

If poverty continues to decline at the same rate, extreme poverty will be eliminated by the year 2030. However, the smaller the number gets, the more difficult it will be to reach the target of zero people living in extreme poverty.

Bono’s factivism could not come at a better time, as the efforts of those who support anti-poverty organizations, legislation, and foreign aid are clearly paying off. Significant progress has been made in the fight against extreme poverty around the world.

However, as Bono stated, there is still work to do. The decline in global poverty rates does not mean that anti-poverty activism is, or should be, coming to an end. Rather, the successes that have been achieved over the last decade are a strong motivation to work even harder to end poverty for every person.

Bono listed three ways that we can work to make poverty rates continue to decline over the next decade. The first is to actively fight government efforts to cut funding to anti-poverty organizations. Second, we should continue to support technological advances that improve the quality of life for the poorest people. And lastly, Bono urges us to fight corruption using social media networking and demand transparency in action from those in power.

To learn more poverty statistics, check out Good News in the War on Poverty. To become a factivist for the world’s poor, find out How to Get Involved in the Cause. Bono advocates factivism, and so does the Borgen Project!