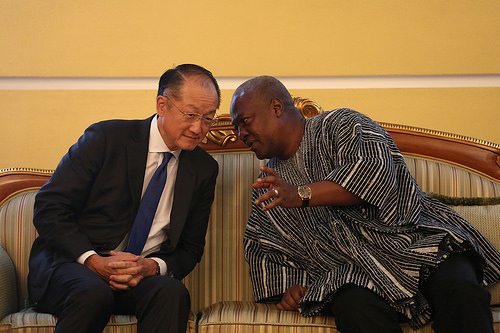 Earlier this month, the World Bank released a report showing that the percentage of people living in extreme poverty around the world will have fallen to 9.6 percent  in 2015, which is below 10 percent for the first time.

With this percentage, the Bank estimates that 702 million people still live in extreme poverty today around the world. Jim Yong Kim’s visit to Accra is part of several activities focusing on the World Bank’s goal of ending extreme poverty by 2030.

However, the whole region lags behind the rest of the world in progressing toward the elimination of poverty. Based on an extreme poverty line of $1.90 a day, Sub-Saharan poverty fell from 56 percent in 1990 to 35 percent from 1990 to 2015.

The content of his report includes whether Africa’s growth covers enough citizens on the continent, the challenges related to poverty data and updates on poverty and other trends related to human well-being.

In the afternoon at the University of Ghana, Legon, Kim also participated in a “Shared Prosperity Forum,” along with government ministers from Africa, civil society and private sector leaders, to share thoughts on what it will take to end extreme poverty in Africa and the rest of the world by 2030. Participants explored Ghana’s own path toward prosperity.

The World Bank’s current portfolio for Sub-Saharan Africa consists of $11.6 billion for 103 projects, including $1.2 billion in IBRD loans and $10.4 billion in IDA commitments.

IFC is a member of the World Bank Group focused on the private sector. It has a total committed investment portfolio of $10.3 billion in Sub-Saharan Africa. IFC also offers advice to governments and businesses to emphasize the roles of private sectors in the global effort to end extreme poverty and boost shared prosperity.

MIGA, the political risk insurance and credit enhancement arm of the World Bank Group, has a gross exposure of $3.3 billion in the region. Ending poverty is a goal that the World is fighting for.