Tag Archive for: Empowering Women Through Education and Entrepreneurship 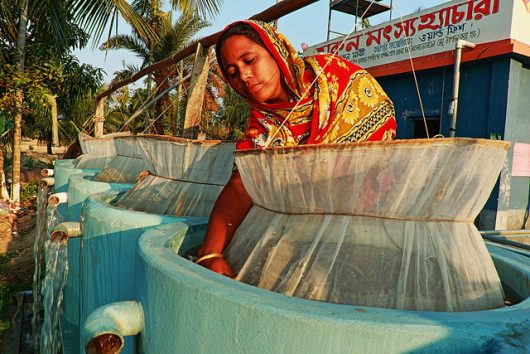 A majority of the world’s poor are women, and gender inequality pervasive in countries around the world is a key reason for this occurrence. Women face barriers to obtaining education and entering the economy that men do not — globally, 33 million fewer girls than boys are enrolled in primary education, and women constitute 61 percent of the illiterate population between the ages of 15 and 24.

Empowering women through education and entrepreneurship reduces poverty by increasing their employability and enabling them to provide for their families and contribute to the economic development of their communities.

Without education, girls are more likely to be trafficked or become child brides; it is also more likely that women and their families will live in poverty. Education is crucial to the reduction of poverty, as it enables women to acquire jobs, help provide for their families and contribute to their local economy.

Women’s incomes rise between 10-20 percent per year of education they receive. This rise in income can be the factor that raises families out of poverty, as women reinvest 90 percent of their incomes into their families (50-60 percent more than men do). This can improve a family’s economic status and increases its food security.

Empowerment in the Workplace

However, many women and girls do not receive the education they need to acquire good jobs. Even women who can obtain an education are not guaranteed work in some developing countries where social norms relegate women to the domestic sphere. In fact, these options can often consign women to duties of housework and childcare and discourage them from entering the workforce.

By empowering women through education and entrepreneurship, women can break down these social norms that restrict not only their own success, but also the prosperity of their communities.

Women who are able to work still face substantial inequality. They often have lower incomes than men in the same positions, and more than one billion women cannot access basic financial services. For example, women farmers in many developing countries are restricted from owning land, accessing credit and acquiring productive resources.

Women also do not receive the same support from national and international development organizations as men do, though they on average produce higher values of output than men. Empowering women through education and entrepreneurship can reduce poverty by allowing women to be productive workers and contribute to the economy.

The World Bank and the Food and Agriculture Organization estimate that developing countries’ agricultural output would increase by between 2.5-4 percent if female farmers had equal access to productive agricultural resources and services. If such resources became available, it would reduce the number of hungry people worldwide by 150 million.

In Malawi and Ghana, improving women’s access to resources increased the production of corn by more than 15 percent, and Burkina Faso experienced a production gain of six percent when fertilizer and labor were reallocated on an equal basis.

With the rapidly rising global population, this increase in food production is crucial to people’s survival. In addition, if gender inequality and the financial barriers women face are addressed, $28 trillion could be added to the global annual GDP by 2025.

To reduce global poverty, the world needs women; but women need the opportunity to obtain an education and be a part of the economy. The Protecting Girls’ Access to Education in Vulnerable Settings Act and the Women’s Entrepreneurship and Economic Empowerment Act both empower women. They both have the ability to reduce poverty by helping women achieve equality and would each cost less than $500,000 over a four-year period.

The Protecting Girls’ Access to Education Act would prioritize efforts to provide girls and women — particularly those in vulnerable settings such as conflict zones and refugee camps — access to safe primary and secondary education. It would focus on reducing discrimination against displaced girls and improving their educational and entrepreneurial opportunities.

The Women’s Entrepreneurship and Economic Empowerment Act would require the United States Agency for International Development (USAID) to conduct a gender-analysis to identify and understand gender gaps so as to better address these in the workplace. Gender-specific measures to empower women would be established in USAID programs, and the agency would expand support for businesses owned and managed by women. The act also emphasizes the importance of eliminating gender-based violence.

The United Nations, FAO, World Bank, World Economic Forum and others all recognize the importance of gender equality in the reduction of global poverty. The Protecting Girls’ Access to Education in Vulnerable Settings Act and the Women’s Entrepreneurship and Economic Empowerment Act are two bills the United States government could pass to help solve the issue of gender inequality and poverty.

Empowering women through education and entrepreneurship will reduce poverty levels among current and future generations, and will benefit not only developing countries but the whole world as well. ­