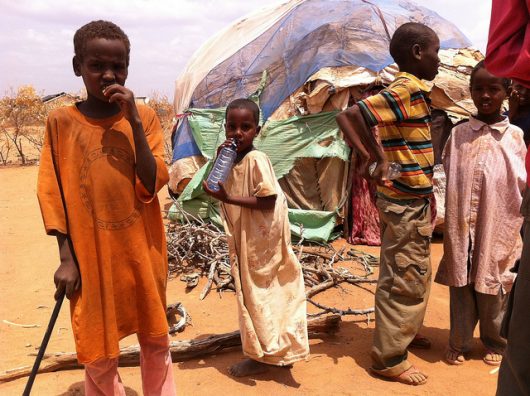 FilmAid, the brainchild of award-winning film and television producer Caroline Baron, began in 1999 as a kind of balm for refugees living in Macedonian camps after fleeing from their homes in Kosovo. Baron believed that there could be a relationship between FilmAid and refugees, as entertaining films have the power to bolster spirits and lift morale amid the drudgery and displacement of camp life.

She was proven right, and after witnessing the numbers of people in attendance for even an hour or two of distracting and satisfying amusement, Baron realized her screens were capable of so much more.

Once she’d accomplished her first goal, Baron’s next step was to produce and present videos that provided vital information to the camp’s inhabitants. FilmAid contributed films on relevant topics like HIV/AIDS awareness and prevention, health and hygiene, women’s rights and conflict resolution, reaching thousands of refugees at camps spread throughout Africa, Europe, South America, Haiti and Asia.

But the project didn’t stop there. After partnering with the United Nations, other nonprofit organizations and some high-powered industry brass, the making of FilmAid productions ended up squarely in the hands of the refugees themselves.

For Refugees, By Refugees

Since then, refugees and FilmAid volunteers have shaped the organization into a community-led creative force. An incredibly unique organization, the participatory relationship between FilmAid and refugees creates an outlet for those enduring the rigors of camp life and the trauma of displacement. In being able to creatively express themselves, many refugees can express hope as well.

All FilmAid activities now fall under one of three categories: Media Content, Community Outreach and Skills Development. Media Content projects include films that tell stories, documentaries, public service announcements containing critical health information (a documentary about landmine awareness and detection skills is of particular note) and even music videos. Activities are not restricted to film only. The Refugee Magazine is written and produced by and for inhabitants of Kakuma and Dadaab camps in Kenya. FilmAid’s official website gives full access to each issue of The Refugee Magazine.

Community Outreach projects include the mobile cinema, in which a screen is secured to the bed of a truck and rolled through camp, displaying media projects, pertinent information and the occasional Charlie Chaplin film. Workshops focused on community engagement, mass media broadcasts and online and social media utilization to share community-made content are all part of FilmAid’s scope in the refugee camps.

Finally, Skills Development brings all aspects of FilmAid together. Through education in photography, journalism, radio and digital media, FilmAid empowers people, especially young people, to tell their stories. Additionally, through its media content, FilmAid provides training to community members who want to facilitate workshops on health, protection and rights issues.

In 2016, the Tenth Annual FilmAid Film Festival was held in Nairobi. The festival’s theme that year was “Where I Am: Stories of the Relationship Between Identity and the Environment.” The festival showcased young filmmakers from the Dadaab and Kakuma camps while providing a platform for other international filmmakers to share stories relevant to the theme. In addition to films screened and awards distributed, a panel discussion was held on the topic “Media, Arts and the Refugee Narrative.”  Through the festival, the creative teamwork of FilmAid and refugees is highlighted while simultaneously entertaining, informing and empowering camp inhabitants.

It’s “a different kind of aid – a skills-driven aid,” says Emmanual Jal in an interview with Vanity Fair. Jal, a former child soldier from Sudan who is nurturing a growing career as a hip-hop musician and actor, performed for a concert in the Kakuma camp in 2015. During the show, volunteers for FilmAid and refugees filmed a music video for one of his songs.

Jal credits FilmAid for being among the few investors in a “cure” for problems rather than just treating them. As the young artist says, “to actually empower somebody and let them rise and gain their dignity, that’s the difficult part.” By giving a voice to the voiceless, FilmAid is helping to improve the quality of life in refugee camps across the globe.