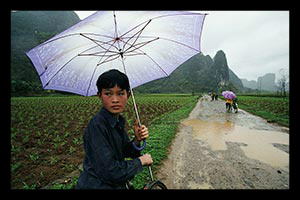 Emmanuel Skoufias is lead economist at the Poverty Reduction and Equity Group at the World Bank and editor of the book “The Poverty and Welfare Impacts of Climate Change.” The purpose of the book is to quantify the prospective long-term effects of climate change on poverty and human welfare.

Five other authors, economists and experts in development, contributed to the book that features smaller projects including work done in Mexico, Indonesia and other countries. The aim of the research was to see how aspects of climatic malleability played a role in impacting different aspects of household welfare. Poverty was just one factor analyzed. The book also looked into the impact that climate had on household consumption and child health.

Change in climate and environmental issues affect much of agricultural productivity. This in turn leads to reduced income and food availability in the household. Considering that a majority of the world’s households in rural areas depend on agriculture, there is increasing concern that continued climate change will become a serious obstacle to development efforts around the world. It was found that urban wage laborers were most negatively affected by climate change due to rising food prices caused by weather-related shocks such as extreme heat, droughts, and floods.

Skoufias emphasizes the importance of understanding the effectiveness of household adaptation strategies and measures that could reduce the impact that erratic weather and climate change has on poverty. Forms of adaptation such as drought resistant crops, diversifying crop production, changing cropping patterns, input use, and technology have the potential to reduce long-term losses from climate change by a half.

Economy-wide growth models, sector-specific studies, and further empirical research, evidence, and analyses on the relationship between climate change and poverty is needed to guide policy. Quantitative estimates about the exact decline in household welfare will help convince governments and change policy to develop, adopt, and expand safety nets that would protect the poor who are most vulnerable to climate change.

“Reducing the impact of climate is not so different from promoting poverty alleviation policies,” said Skoufias.