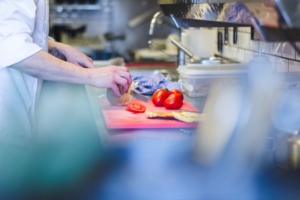 Recently, The Borgen Project spoke with Emilie Elzvik, a 21-year-old student at Northeastern University and former volunteer at Lentil as Anything. Elzvik never imagined herself serving gourmet vegan meals to a table filled with backpackers, refugees and homeless people in Newtown, Australia. But, Lentil as Anything changed everything for her.

Lentil as Anything embodies a rare business model. The menu does not have any set prices. Everyone is welcome to “pay as they feel,” either through a financial donation or volunteering their skills. The founder, Shanaka Fernando, was born in Sri Lanka before becoming a restauranteur and world traveler. In 2000, Fernando began the first Lentil as Anything in the Australian city of St. Kilda to provide a space for local communities to come together and share a meal “disregarding any existing economic and social barriers.”

At the time, Fernando’s concept was a wild idea. Twenty years later, it has become a booming success. The restaurant chain now claims four restaurants around Australia. Additionally, Lentil as Anything provides more than 1,000 free meals a week to people most in need.

Elzvik began working for Lentil as Anything when she was studying abroad for a semester. “It’s like every hippie’s dream cafe, except customers are not just wealthy teenagers. They are from various socio-economic backgrounds. Some live on the street outside. Some are just traveling through.”

Elzvik points out that many of the volunteers were once customers themselves. “When they can’t pay, they offer their time,” said Elzvik. Lentil as Anything provides just as many employment opportunities as they do meals. Elzvik comments, “I think many people come to volunteer because it gives them a sense of purpose.”

According to Elzvik, there is no such thing as a boring day at Lentil as Anything. “It is no gloomy soup kitchen,” she states. Spices like nutmeg and cinnamon waft through the kitchen. Volunteers twist lemons and grate ginger. Servers dance around the floor, jotting orders down on their notepad. It is always noisy inside; laughter bounces across the walls. On some late nights, there is yoga or an open-mic night in the upstairs space.

So how exactly does this seemingly utopian cafe operate?

Elvzik recalls the kitchen being full of “bruised apples” and “funky looking eggplants” that would get thrown out by most restaurants or stores. “Lentil as Anything takes them and turns them into something beautiful,” says Elzvik.

The Department of Agriculture in Australia reports that food waste costs the economy around $20 billion each year. That amounts to about 300kg per person or one in five bags of groceries.

To stock the kitchen, Lentil as Anything takes in unwanted leftovers from nearby stores. The chain stands by its all-vegan menu. The diet is both inclusive and nutrient-rich. Elzvik mentions that many visitors would not be able to afford something as “dense and hearty” as a Lentil as Anything meal. Fast food is typically the most affordable option and Lentil as Anything aims to change that.

The restaurant relies heavily on volunteer servers and cooks, like Elzvik.  CNBC reports that around 60% of new restaurants fail within the first year. By a restaurant’s fifth year, that rate jumps to 80%.

Lentil as Anything is not an exception. The restaurant cannot stay afloat on its own. The Daily Telegraph reports that “it costs Lentil as Anything up to $23,000 a week to keep [its] doors open – and customer contributions do not come close to covering costs.”

Before coming to Lentil as Anything, Elzvik had no prior customer service experience. She says that volunteering at the restaurant requires no experience at all. Volunteers attend an orientation and receive the necessary training. “What you learn at Lentil can be applied to any future job, especially working with people in a busy environment,” states Elzvik.

Restaurants like Lentil as Anything might not work just anywhere. “You need the perfect equilibrium,” claims Elzvik. She explains that in order for this business model to work, there must be enough people donating above the requirement to cover those who cannot afford these costs.

One of Lentil as Anything’s strategic locations is Newton in Sydney. Newtown is a diverse neighborhood, socially and economically. The Australian Bureau of Statistics reveals that 67% of the Newtown population works full time, 24% part-time and less than 5% identify as unemployed.

Like many businesses, the pandemic hit Lentil as Anything deeply. On September 25, the restaurant reached out to its social media followers and asked for help to keep Lentil alive.

Lentil as Anything is facing its most significant financial challenge to date. The restaurant is working to raise $300,000 by the end of October. If it does not reach its goal, Lentil as Anything may face closing its restaurant doors forever. Donations can be made through its GoFundMe campaign.

The restaurant’s motto is that everyone deserves a seat at the table. Hopefully, Lentil as Anything can serve as a successful business model for many restaurants around the world to address food insecurity.

December 7, 2020
https://borgenproject.org/wp-content/uploads/The_Borgen_Project_Logo_small.jpg 0 0 Lynsey Alexander https://borgenproject.org/wp-content/uploads/The_Borgen_Project_Logo_small.jpg Lynsey Alexander2020-12-07 01:31:362022-03-30 04:13:20Lentil as Anything is not an Ordinary Restaurant